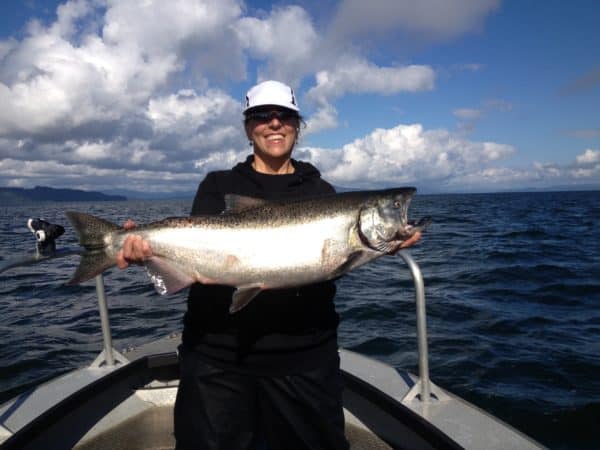 This weekend is the perfect time to take a friend or family member fishing. It’s Free Fishing Weekend, Aug. 17-18, which means they won’t need a license, tag or endorsement to fish, crab or clam anywhere in Oregon (that’s open to fishing, crabbing or clamming).

Willamette Valley/Metro – Reliable reports are coming from the mainstem Columbia, just downstream of Portland, that Chinook are in the river, and in decent numbers. Kalama area trollers and anchor anglers are posting some surprising early season catch rates. Fish passage remains subdued.

Clackamas and Sandy River anglers continue to struggle for results on summer steelhead. The spring Chinook in these respective systems are soon to spawn.

Pro guide Jeff Stoeger (503-704-7920) of O2BFISHN reports, “This week was a sad week for a couple of families that lost loved ones to preventable drownings. The river can cause all types of problems even in low flows so its important to let loved ones know where you are going to be fishing. My report is that there is coho and chinook of the mouth of the Sandy and casting spinners and plugs will be very effective. The river is coloring up during the day when the temp tends to climb and then goes back to a more natural green when temperatures cool.”

Northwest Oregon – Just a few more days of the Buoy 10 season (for Chinook) left. Chinook fishing has been good and the fishery is tracking as expected so an August 20th closure is likely. Both the Oregon and Washington side has been producing good catches of Chinook with a rare coho in the mix. Fresh anchovies has been working well, but the Chinook are responsive to herring and spinners as well. See the full version by being a paid subscriber or last week’s edition here.

Ocean fishing for mostly coho has been an odd struggle. Fish have been far offshore and it hasn’t been easy finding biters even though fish seem to be present. The fish we are catching are full of bait so that doesn’t make for aggressive biters. The Long Beach Peninsula bite has been nearly non-existent and Chinook are hard to find in the ocean. The whales are offshore in force however. Anglers had attained just over 51% of the catch quota according to the August 11th update.

South of Falcon coho fishing has been challenging too. Warm water may certainly be a factor as it’s been a challenge keeping water temperatures consistent. Tuna have also caught the attention of some north coast anglers.

Tuna fishing is improving with those working at it, catching upwards of 40 or 50 per trip. Anglers are still having to travel over 30 miles to be successful.

Freshwater fishing for salmon, steelhead and trout remains tough for most north coast systems. The Alsea and Siletz are early kick-off systems for fall Chinook and although a few Chinook are available, it’s not enough to draw a lot of attention, especially with the Columbia in peak performance.

Trolling for sea-run cutthroat trout is a good option this time of year, but few are taking advantage of it.

Crane Prairie –  Trout fishing is holding up on CPR with good fishing near the channels where the water is cooler.  Mornings and evenings are best and trout fishing should be suspended on the warmest days by 11am to safe guard the fish.

Bass fishing continues to be good with several fish in the 2 to 4 lb range being caught. Fishing plastic worms and jigs are taking most of the fish but spinnerbaits and top water will produce too.

Wickiup –  The reservoir is is LOW.  Bass fishing is still an option here as the lake lowers and warms. The trout and Kokes made it through last year so here’s to hoping they can survive another ultra-low water year.

East Lake – East Lake fishing is good one day and slow the next.

Lower Deschutes River – Caddis are all over on the lower D.  Warm weather has not turned off the bite and evening fishing has been great!

John Day River – Bass fishing was great until all the rain last weekend sent the river into a maelstrom of muddy water.  The river bumped up to nearly double its flow but by this weekend should be back to fishable shape. You can still get down the river in a single pontoon but there are plenty of places like Cottonwood Canyon where you can walk in and have great fishing.

Snake River  – I was over on the Snake River above Heller bar last weekend. Sturgeon fishermen were reporting a fair bite and we watched about an 8 footer being released.  The river was busy with jet boat and raft traffic coming out of the Salmon River but everyone was careful and cordial.  If you’ve never gotten over and enjoyed the canyon it is quite spectacular and I would put it on my bucket list. The river is very moderate below the Salmon and could be run by anyone who has experience with jet boats.  There are dozens of great outfitters too who can run you up river for a day or a week.

Best of luck to you all this weekend!  Tight lines!

See the full version of Tim’s report by becoming a paid subscriber here.

The Crooked River offer anglers a good chance at 10- to 16-inch trout and whitefish, but watch out for higher water flows early next week.

The Fall River is scheduled to be stocked this week.

Ocean salmon-fishing success dropped off somewhat last week to .78 retained salmon per angler/trip. Newport continues to be the busiest port along the central Oregon coast. It’s 15,802 anglertrips is more than twice as many as any other port. Winchester Bay is second with 7, 7672 angler/trips and Garibaldi is third with 7,440 angler/trips.

As for chinook salmon catches, Newport leads with 1,160 followed by Depoe Bay with 663 and Winchester Bay with 642.

With two weeks left in the season, 36.5 percent of the quota has been caught and kept.

Portland-area fishing regulations that were loosened last year are more restrictive this year.

Second rod licenses will not be allowed on the Willamette River this year.

Barbed hooks will no longer be legal to use on the Columbia River this season.

Retention of cabezon will be prohibited for all boat-based anglers beginning 12:01 a.m. on Friday, August 16.

If you want to feel better about most salmon-return surveys just compare them to the return of Snake River sockeye salmon – which is the lowest in a decade and only six percent of the ten year average.

Recent studies have concluded that a major cause of hatchery salmonids straying in coastal streams is due to certain streams lacking distinctive odors.

The emergency fishing restrictions on the Umpqua River are still in effect. The upper limit is the boat ramp at River Forks Park. The lower limit is the Scottsburg Bridge.

One area of confusion involves Mill Creek, which despite being completely closed to angling. is below the lower limit of the emergency restrictions. The confusing part is whether, or not anglers can fish the mainstem Umpqua River within 200 feet of the mouth of Mill Creek.

Ocean salmon fishing for Chinook salmon from Cape Falcon to Humbug Mt is open. The ocean fin-clipped coho salmon is open until Aug. 25 or until we reach the quota of 90,000 fin-clipped coho. Chinook must be a minimum of 24-inches long and coho must be at least 16-inches. Fishing for salmon has been okay with Winchester being the most productive port on the coast. Anglers have been averaging one fish per person. As of August 4, ocean salmon anglers have caught 36.5 percent of the fin-clipped coho quota.

Albacore tuna have been caught 15 – 35 miles off shore from Charleston and Winchester Bay. Many boats have been bringing in 20 or more tuna each trip. A few dorado have also been caught while fishing for tuna.

On the Coos, anglers have been catching a few fall Chinook trolling from the chip pile to the California St. boat ramp.

Albacore tuna are being caught just 15-35 miles off shore from Charleston to Winchester Bay. Some boats are bringing in 20 or more tuna per trip.
Anglers are still catching stripers on the Coquille.

Summer steelhead numbers are increasing in the middle and upper Rogue and the recent storm may have pushed more fish upstream. Keep in mind fishing for chinook upstream of Dodge Bridge is now closed.

On the Umpqua, anglers are catching a few Chinook in the bay.

The Rogue River above Lost Creek Reservoir is scheduled to be stocked this week and this is a great area to escape summer heat and enjoy cooler water temperatures where trout will still readily bite.

Pikeminnow are not native to the Rogue River and anglers are always encouraged to remove them while fishing on the Rogue. Until Sept. 2, the STEP program is running a pikeminnow harvest contest for the Rogue River. For more information pick up a flier at the Central Point ODFW, local bait and tackle shops, or call Ryan Battleson at 541-826-8774 x 226.