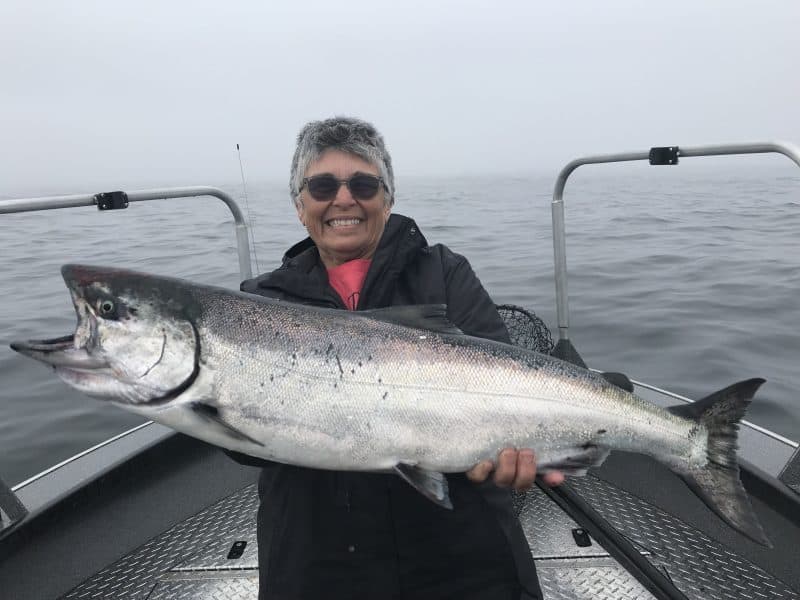 Willamette Valley/Metro – With the mainstem Columbia now open for fall Chinook, most metro anglers are flocking to the coast for fishing opportunity that we haven’t seen in quite some time. The river is now open by Portland but even with rumors of fish being taken around Longview recently, anglers remain focused on estuary fisheries for the time being. The salmon season will be short for upriver anglers so early effort is encouraged for those that love this metro area fishery.

The Clackamas and Sandy remain an option for scarce numbers of summer steelhead, spring Chinook are largely off the table.

Pro guide Jeff Stoeger (503-704-7920) of O2BFISHN reports, ” This week’s report is slow. The hatchery is still getting a few summer steelhead and the upper river has hold-over springers. There are a few fish in ok shape that will cut red but most of the fish have started to show there spawning colors and marks. The section of river you should concentrate on is the mouth and Dodge Park to Cedar Creek Hatchery.”

Some anglers are happy with warmwater opportunities in the metro area so check local resources such as the ODF&W web site for details.

Northwest Oregon – Buoy 10 is once again stealing all the headlines, with surges of Chinook entering the lower Columbia. River fishing for Chinook is off to a good start and should stay steady through the modeled closure on August 20th.

Coho anglers off of the mouth of the Columbia are also yielding good results, but success rates do vary from day to day. It was tough fishing on Wednesday, but Tuesday was great out of Astoria.

Albacore are offshore in fair numbers, mostly foraging from 35 to 45 miles offshore. Trolled clones and cedar plugs are taking fish, as well as jigging iron and live bait when available.

Coho fishing has slowed after a great start in the South of Falcon fishery. Sport anglers have yet to harvest 40% of the quota and the fishery remains open through August 25th. Fluctuating water temperatures may partly be to blame, but the weather hasn’t been great until just recently.

As of Wednesday, numbers weren’t available for the August 2 – 3 summer all-depth halibut fishery, but given the weather conditions that day, I can’t imagine many halibut were caught. More will be revealed.

The Nehalem fishery is firing off, pretty surprising given the low numbers speculated for the fishery this year. Mid-August is peak season fishing however, and there have been some fairly impressive bites around Wheeler this week.

Not many are participating in freshwater fisheries given the low, clear water conditions. Summer steelhead remain an option on the Siletz, Wilson and Nestucca systems, in that order. The Siletz should have some Chinook present as well as the Alsea in the coming days.

Trolling for sea-run cutthroat trout is a nice option this time of year as well. Again, it’s a bit old school, but action should be worthwhile.

No update this week, Tim is out and about.

The Crooked River offers anglers a good chance at 10- to 16-inch trout and whitefish, but watch out for higher water flows early next week.

Metolius Pond and Fall River are scheduled to be stocked this week.

Bass fishing on the John Day is picking up.

Walleye fishing has been good in the John Day and The Dalles pools of the Columbia.

Trout fishing in Fourmile Lake has been good.

Anglers have been picking up some 2- to 3-pound largemouth bass in the Thompson Valley Reservoir.

Ana Reservoir was stocked with another 7,000 rainbow trout. Fish should be literally jumping in the boat this weekend!

This is a good time of year to throw hopper patterns for redband trout on the Chewaucan River.

Newport continues to be the busiest port along the central Oregon coast. It’s 14,235 angler trips is more than twice as many as any other port. Garibaldi is second with 6,820 angler trips and Winchester Bay is third with 6,715 angler trips.

As for chinook salmon catches, Newport leads with 1,136 followed by Depoe Bay with 653 and Winchester Bay with 613.

A friend of mine had an incredible hour on the lower Coquille River last week.

According to the Columbia Basin Bulletin, the Columbia’s predicted coho run this fall is 162 percent of normal.

Although more consistency would be desirable, tuna have recently been caught within 20 miles of some Oregon ports – including Charleston.

The Umpqua River is now under emergency fishing restrictions from the Scottsburg Bridge on Highway 38 upriver to the boat ramp at River Forks Park.

Ocean salmon fishing for Chinook salmon from Cape Falcon to Humbug Mt is open. The ocean fin-clipped coho salmon is open until Aug. 25 or until we reach the quota of 90,000 fin-clipped coho. Chinook must be a minimum of 24-inches long and coho must be at least 16-inches. Fishing for salmon has been okay with Winchester being the most productive port on the coast. Anglers have been averaging one fish per person. As of July 28, ocean salmon anglers have caught 35.2 percent of the fin-clipped coho quota.

Summer steelhead numbers are increasing in the middle and upper Rogue. Now would be a good time to hit the water. Fishing for chinook on the upper Rogue between Dodge Bridge and Cole Rivers Hatchery is now closed.

As of last week, a total of 1,304 hatchery summer steelhead had returned to Cole Rivers Hatchery, the third-highest count to date in over 25 years.

Fishing for rockfish inside Coos Bay has been good near the submerged rock piles.

There should be a Chinook or two lurking in the lower sections of the Smith River.

The Rogue River above Lost Creek Reservoir is scheduled to be stocked this week and this is a great area to escape the summer heat and enjoy cooler water temperatures.

Pikeminnow are not native to the Rogue River and anglers are always encouraged to remove them while fishing on the Rogue. Until Sept. 2, the STEP program is running a pikeminnow harvest contest for the Rogue River. For more information pick up a flier at the Central Point ODFW, local bait, and tackle shops, or call Ryan Battleson at 541-826-8774 x 226.