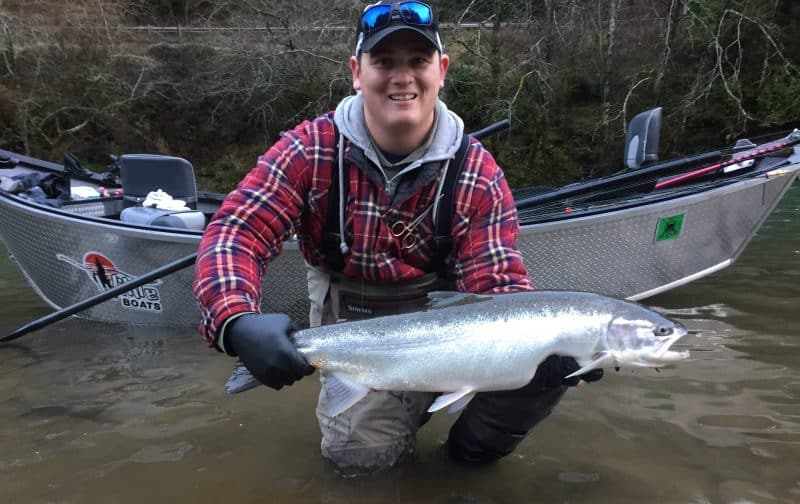 Willamette Valley/Metro – Willamette River spring Chinook anglers have the fever, and effort is concentrated from Sellwood Bridge to Milwaukie, in an attempt to catch one of the finless unicorns most call spring Chinook. There’s been a handful caught and most are saying it’s a nice grade of fish so far this year. Trolled herring are of course getting the best results. And since we’re talking Willamette River, there are nearly 7X MORE wild winter steelhead over the Falls to date in 2020, than there were over the falls in 2017 when there were about 40 feeding sea lions taking them out one by one. And who says government isn’t working for fish recovery?

Seasons have been set for the mainstem Columbia, you can view the official press release HERE. It’s a different format this year, a days per week season that theoretically, should enable us to utilize ALL of our impacts with the 4 day “assessment” period between open days.

Here’s what pro guide Jeff Stoeger (503-704-7920) of O2BFISHN GUIDE SERVICE had to say about Sandy River fishing, “Hello All; I hope that you were able to get out and wet a line this past week. The river took a small bump and has dropped to ideal level. There has been fair numbers of fish caught throughout the entire river. Some guys that have been chucking flies in the upper river and in Oxbow park area have had some good success. Those fishing beads and jigs have also done well in the entire river and beads in the sizes 12mm and 14mm seems to be the perfect size.”

The Clackamas has been hit or miss, but overall, anglers are pretty happy with early season results. There seems to be more anglers since the news got out, but hopefully that makes for robust catches this winter. There is still plenty of good opportunities to go here. The most productive reach is often Barton to Carver, and that won’t likely change anytime soon however, lower flows may dictate better fishing further downstream (below Carver).

There are some winter trout opportunities, but with the upcoming weather blast and current wet weather events, maybe they should fend for themselves for just a bit longer. HERE is the February stocking schedule.

Northwest Oregon – It’s been a hit or miss week for north coast steelheaders. Water conditions were near ideal on Monday, with plenty of people plying the waters in hopes of steelhead success. There have been fish caught all week, but the rivers have dropped and anglers are having to be more innovative under these conditions. The rivers remain filled with excited anglers.

The Wilson and Nestucca produced some of the best catches on the north coast. Of course, that’s where the bulk of the effort was as well, in hopes of finding take-home steelhead.

Pro guide Chris Vertopoulos (503-349-1377) put some time in on the Nestucca, averaging 2 – 4 opportunities per day and getting some high quality steelhead bobber-dogging his clients. It’s been crowded over there, as it looks to be another productive season for steelheaders.

The Kilchis, Trask, Necanicum and NF Nehalem produced some catches, but was slowing by mid-week. Wild fish are starting to make up a larger percentage of the catch on the smaller, early season favorites.

A short but productive window for lings, bass and crab came on Wednesday and Thursday with EZ limits for those that know the reefs. Limits of crab weren’t common, but they are in great shape and 24 keepers came for pro guide Jason Lewis (503-858-2699) on Thursday, fishing the deeper reefs for the bigger lings. The ocean is due to blow up again by Friday, no fish taco’s for me…

Bay crabbing, not so good.

From our friend Tim Moran

Lower Deschutes River –  Locked gate to Oak Springs – Trout fishing is good fishing nymphs and BWO’s in the afternoon.  The big stones are present and they’re a good heavy fly to get you down.

John Day River – Steelhead fishing has been off as the water has been high and muddy.  The river is at 1290 CFS at Service Creek but is forecast to drop so fishing should pick up.

Metolius River –  The Fly Fisherman’s Place shop in Sisters reports good fishing on nymphs with a BWO hatch in the afternoons.  There is also a small amber colored caddis coming off too. Nymph fishing is good too.

Crooked River – Flows are low and stable and fishing is good.  Mostly small midge and BWO imitations from the nymph stage through the adult cycle.

Grand Ronde River – Water was high at last report but should be dropping..steelhead will be present when you can fish for them.

Prineville and Ochoco Reservoirs – Both of these lakes are fishing well and should be great options in the next week.

Lake Billy Chinook – This report comes from Hugh, TGF reader who reports that kokanee fishing is good in 90 to 100 feet of water.  Limits came easy and they switched to plugs and spoons for Bull Trout.  BT fishing was fair with a few smaller fish caught but should improve with the improving weather and the calendar.

Spring is on the way and with it better fishing – Good luck this week!

Wizard Falls Hatchery grounds will be closed Feb. 17-21 for hazardous tree removal. Anglers can park at the hatchery but can’t access facility’s grounds.

The Deschutes, Crooked, Fall and Metolius rivers are open year-round and offer fair to good fishing for native redband trout.

Steelhead fishing on the Grande Ronde can be quite good in January and February, when flows cooperate. Look for uncrowded conditions and lots of open water.

Steelhead fishing on the John Day has slowed due to high water and slow visibility. But steelhead continue to move upriver so keep an eye on water levels and be ready to water when levels start to drop.

Fishing conditions on the Umatilla continue to be good. Water levels increased this week and over 90 steelhead have been counted at Threemile Dam in the past three days. Steelhead anglers should focus on the lower sections of the river above and below Threemile Dam.

Priday Reservoir is open and anglers have been catching some nice trout.

In Krumbo and Malheur reservoirs, fishing has been good for trout up to 20 inches.

Ice conditions continue to deteriorate with warm weather and rain. Ice anglers should use extreme caution before venturing onto the ice.

Best bet for the Klamath area continues to be native redband trout in the Klamath River. Check out the stretch between the Powerhouse and CA state line.

A series of winter storms have continued to hit the Oregon coast over the last several weeks and has pretty much kept recreational anglers off the ocean. So no new reports or information on how bottomfish fishing has been. If ocean conditions cooperate, lingcod fishing in January can be very good.

Water levels continue to be low and clear in the Coos and Coquille basins. Anglers should target deeper water with small, dark presentations.

Last week, Saunders Lake got 30 excess hatchery steelhead, which should spice up any trout anglers diet.

The small bump in river flows this past weekend should have winter steelhead starting to show more in the Galice Area. The Grants Pass area has been pretty slow so far.

Both Reinhardt Pond and Lake Selmac received their first stocking of the season last week. There should still be fish around for this weekend.

The trout bite continues to be good in the Holy Water, the stretch of the upper Rogue between the hatchery and the Lost Creek Lake spillway. Anglers are reminded this is a fly-fishing only section of water.

Steelhead fishing continues to be hot on the Chetco and it’s been picking up on the lower Rogue.

Steelhead fishing continues to be decent on the mainstem Umpqua River.

Ocean commercial crabbers indicate their catches are about 1/4 of last year’s catch. Not a good sign for the overall harvest this season.

Smelt dippers did well on the last opener, limits for most. HERE is another chance for folks to get some more smelt, as in February 26th coming up soon!

Sec 6 (Kalama) bank – One salmonid angler had no catch.

Sec 8 (Longview) bank – One salmonid angler had no catch.

River flows at Mayfield Dam are approximately 20,900 cubic feet per second on Monday, February 10, 2020. Water visibility is 3 feet and the water temperature is 43.2 F.