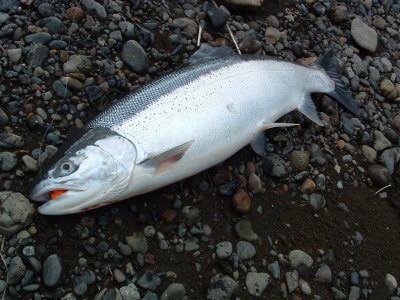 Willamette Valley/Metro – The Willamette River itself has been on the move, as in an upward fashion. That’s kept both steelhead and sturgeon fishermen off the river, avoiding floating debris on its way westward.

Steelhead passage is going well at Willamette Falls now that there is some water in the river and no sea lions to impede passage. Certainly too early to again celebrate better numbers than last year, but counts are up relatively significantly for this early in the season. Kudos to ODF&W for getting the job done! We still have to deal with the Stellar sea lions slaughtering the sturgeon and steelhead downstream of the mouth of the Clackamas however.

District steelhead rivers have been hit or miss for conditions. They’ve largely been a miss for steelhead anglers, however.

Here’s what pro guide Jeff Stoeger (503-704-7920) had to say about Sandy River fishing, “Hello All.  This week The Sandy River report has some positive outlooks. We finally had the river go up over 12ft  and it flushed a lot of stuff out of the river. The other positive thing is that we had a fresh batch of steelhead show up. The numbers were not outstanding as catches go,  but a fish or two were caught regularly in the lower river. I heard of a couple of hatchery fish being caught that weighed in at 11 and 10 lbs over the last couple of days. The river is on the high side for floating but ideal for sleds. The river has great color but the forecast is for the river to go up to almost 12ft by the weekend.

It’s much the same on the Clackamas River. The river has been running high with little effort in comparison to the Sandy River. There has been winter steelhead taken here, but not with any regularity. They’ve been moving rapidly upstream given the water conditions and anglers that are targeting them are using bigger, brighter gear with eggs fished in the slower water where these fish tend to hang in the higher flows.

There are some winter trout opportunities, but with the upcoming weather blast and current wet weather events, maybe they should fend for themselves for just a bit longer. HERE is the January stocking schedule.

Henry Hughes sent us a note letting us know that the Statesman Journal did a story and short video on his winter fishery at Detroit Lake. You can find that story and video here. Thanks for sharing Henry!

After a prolonged period of high water, levels are just coming down now enough to get out and see what’s available. Overall, anglers are unified on this front; the early component of winter steelhead is far from impressive.

Anglers have not fished the bigger river systems such as the Wilson and Nestucca Rivers recently, and the North Fork Nehalem only just came in today. The river was running high but had good color at 54 inches on Thursday, January 9. No reports on how the afternoon went. The recording did note that the trap had 170 adults in it the other day, 50 of which went to Vernonia pond for additional recreational opportunity. The recording confirmed that overall, fishing this year has been slow.

Smaller systems such as Three Rivers and the Necanicum as well as the Highway 30 systems should be in full bloom right now. Sadly, “full bloom” these days is mediocrity at best.

Given that mediocrity that the smaller systems have seen the season, nobody is holding out high hopes for robust fishing on the bigger systems when they do come in maybe by Monday. Tomorrow, (Friday) May offer a glimmer of potential fishing for a day before the rivers rise once again. When weighing your decision to travel to the north coast, realize that low-level snow is in the near term forecast making traveling relatively treacherous this weekend. A drop in air temperatures doesn’t do wonders for already challenging conditions either.

Sadly, steelheading is the best North Coast option as the ocean will continue to be upside down for the foreseeable future.

Bay crabbing doesn’t look promising either with a combination of King tides, and a large influx of freshwater into the estuaries recently. Not even the lower Columbia, for more than 1 reason, will be a good idea this weekend.

To round it out, razor clam digging is closed. How’s that for a happy new year?

Well – this report is a bit thin as winter has settled into the cascades and points east.  The forecast is for 50 to 70 inches of snow in the passes in the next 6 days so it may be a good week to get your gear in order near the fire with your favorite libation!  But for those of you willing to brave the snow and bone-chilling cold here are a few options.

Lower Deschutes River –  I haven’t gotten an update from the Deschutes in a while but trout fishing should be fair in the canyon between the locked gate and Sherars’s Falls.

John Day River – Steelhead fishing was fair in the river from Cottonwood to Clarno last we heard.  It’s going to be really cold and you’ll have to deal with iced up guides and cold fingertips.

Metolius River –  I fished here last weekend and it was a bit tough as it was snowing pretty hard at the time.  I managed a few fish on a two nymph dropper under an indicator.  The fish were in the seams.  The Metolius is in a pretty heavy snow zone and I’d expect lots of snow this weekend and next week.  It can be dangerous to enter the river when the banks are high with snow so use caution.

Fall River –  I can’t imagine this will be too accessible for the next week or so.  I’d wait until the skies/roads clear.

Crooked River –  This is your best bet as it won’t get as much weather.  Fish late in the morning to early afternoon.  Your window will be about 4 to 5 hours.

Steelhead fishing on the lower Deschutes continues to be fair. Though numbers are fewer this year, fish are well-dispersed from the mouth to the angling deadline.

The first winter steelhead are just beginning to return to the Hood River.

Taylor Lake has been stocked this fall and fishing should be good.

Trout anglers can target the Crooked, lower Deschutes and Metolius rivers, where fishing for native redbands is open throughout the year.

Recent cold weather has slowed steelhead fishing on the John Day, but flows and minimal ice conditions are good for fishing.

Fishing conditions on the Umatilla are good. Steelhead anglers should focus on the lower sections of the river above and below Threemile Dam.

Ice fishing on Kinney Lake and Magone Lake has been good.

Winter can be a good time to target wipers in Ana Reservoir.

Check out 14 tips for ice fishing in Oregon.

Bottomfishing is open to fish at all depths. The daily bag limit for marine fish is 5 of which only one can be a copper, quillback or China rockfish. Anglers are also allowed 2 lingcod per day. The harvest of cabezon will not open until July 1.

Anglers are starting to catch steelhead in the Tenmile, Coos and Coquille systems.

Steelhead fishing on the mainstem Umpqua has been pretty good, but with rain in the forecast for this weekend anglers might want to adjust their tactics for high water. Plunking is a popular choice.

Trout anglers can still catch fish that were stocked earlier in the year. As long as conditions allow, places like Lost Creek Reservoir can fish throughout the winter.

Hatchery steelhead returns in the Coos Basin will be down this year due to low smolt releases two years ago. Because of disease issues at the hatchery then, we were only able to release less than 40 percent of our production goal.

Fishing for rockfish inside the bay has been good near the submerged rock piles. Fishing is typically best near slack tide. Boat anglers are no longer able to harvest copper, quillback, or China rockfish for the remainder of the year because we reached our catch limit on these species. A jig with a twister tail can be a great bait for catching rockfish.

Winter steelhead fishing should start to pick up in the Lower Rogue. Anglers might want to try swinging flies, tossing spinners or running plugs. When expecting rain and rising river levels, consider switching tactics and anchor up and back-bounce eggs.

Bank anglers will want to look for fish on inside of bends in the river and slots along willow banks.

Half-pounders are still present in the Rogue Canyon, but anglers are reminded only hatchery trout can be retained.

There have been some good reports of steelhead continuing to come in, especially during or after a rain event. Summer steelhead are looking skinny as it nears their time to spawn, and some anglers may begin to encounter kelt or “down-runners,” fish that have already spawned and headed back to the ocean. Please treat these wild steelhead with care and release them unharmed so they can come back again next year.

Steelhead will bite on bait, spinners or a well-placed fly. Wild steelhead must be released unharmed unless you are below Hog Creek Boat Ramp, there anglers may keep 1 wild steelhead per day and 3 per year.

Steelhead fishing has been decent throughout the main Umpqua River. With rain in the forecast, the river may be a little high this weekend. A lot of anglers fish the main by “plunking.” This is usually a good strategy for water with more color and when the water is high. Make sure to turn in snouts from hatchery fish for a chance to win a gift card.

The mainstem South reopened to steelhead fishing Dec. 1. Fishing usually picks up in January and anglers have been picking up some fish.