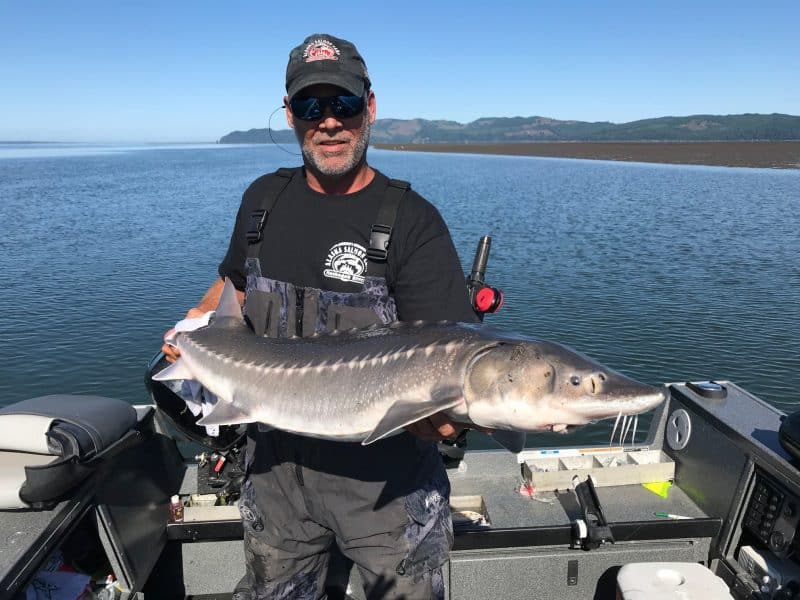 Willamette Valley/Metro – Traditionally, summer steelhead anglers are creel deep in success on the Columbia River, but a depressed return this year has limited angler’s ability to bring home a prize. Passage at Bonneville is fair but warm water conditions and far fewer fish than normal will continue to challenge anglers for the remainder of the season. Rolling closures will impact angler opportunity as well so check regulations for the reach of river you choose to fish.

Fall Chinook season opens back up on the Columbia on August 1st, but Chinook won’t be in the Portland/Metro area for another month in catchable numbers.

The Willamette is a warm water fishery now, coho will start to show in early September.

The Clackamas and Sandy Rivers will be a summer steelhead fishery now although like the Columbia, numbers are down and so is success. In low flows, fish will be hiding in deep pools or pocket water, where they are more likely to bite. Early mornings will continue to produce the best opportunities.

Pro guide Jeff Stoeger (503-704-7920) of O2BFISHN reports, ” I was out this last week with no luck. The river was steelhead green in the early evening  and at first light. The snow really starts to melt and picks up during the main portion of the afternoon as the weather starts to heat up. The glacial color starts to pick up and colors the slower portions of the river with faster moving water filtering the glacial color. This past weekend, we saw a record number of people on the Sandy trying to cool down. The state police and Troutdale  police closed the off the ramp to Lewis and Clark Park and from Troutdale Bridge to the highway. Dabney Park was also closed as too many vehicles had filled the park up. Oxbow Park was also packed with swimmers as well Dodge Park.”

The Tillamook Report – Anglers continue to look to the salt water for salmon success but a spell of cold water inundated the coast when the northwest trade winds started up, quelling the bite for the time being. When temperatures stabilize, the bite should turn back on.

Pro guide Rob Gerlitz (503-812-4950) has a few days left for some salmon and/or bottomfishing combination trips. Combination fishing (bottomfishing and salmon, when conditions allow). Prices range from $200 for the salmon/bottomfish/crabbing triple crown, to $125 for a 1/2 day salmon fishing trip. Call Rob today at 503-812-4950 or email him at rgwguideservice@gmail.com. Open seats this week are:

Chinook are a bit more common south of Cape Falcon, but coho numbers will remain robust through the remainder of the season, which doesn’t close until late August. Depoe Bay is the most productive port, followed by Newport, Pacific City and Garibaldi in order. Oregon coast coho often migrate north to their likely destination, the Columbia River and should provide improving opportunity over the next several weeks, from south to north. The sportfleet has harvested just over 30% of the quota, it’s been a very productive season.

Halibut catches have remained under-whelming. Weather has been a factor for the all-depth fishery, but the nearshore fishery hasn’t been impressive either. Over 80% of the nearshore quota remains unused.

Bottomfishing remains good and likely to remain that way. Ocean crabbing is fair, but crab are entering the molt.

The Astoria Report – Sturgeon fishing has been sporadic, but if you find them, action remains fantastic for fish to 8 foot in length. Fresh anchovies is producing catches from Rice Island to the Astoria Bridge, mostly in the channels of Taylor Sands.

The offshore fishery for coho experienced a hiccup when waters cooled with the change in wind direction. The red buoy line from Buoy 2 to the CR produced well for early morning anglers from day break until about 10:00 a.m. The action should pick up as fish acclimate to the cooler water temperatures and show up in greater numbers as August progresses. Chinook remain a rare catch off of the mouth of the Columbia. Albacore showed up in force early in the week with anglers catching then trolling, jigging and deploying live bait. It’s the moment many have been waiting for and action will only improve into August and September. Action is good within 60 miles of Tillamook Bay and the mouth of the Columbia.

Tim is back on the water doing his “research,” he suggests looking at last week’s archived report (below) since it has a lot of application this week. Thanks Tim, and we look forward to hearing about your new adventures!

Crane Prairie –  Trout fishing is good and fish are still being caught near the channels. Bass fishing continues to be very good with several fish in the 2 to 4 lb range being caught.

Hosmer Lake – It’s a damsel and zebra midge show on Hosmer right now and fishing has been very good.

Wickiup –  The reservoir is starting to drop fast now with summer weather returning.  Bass fishing has taken most of the attention away from the kokes and browns this week as several reports came in with pictures of some nice bigmouths caught in the reservoir.

Prineville Reservoir:   No word on Prineville this week but it’s been holding up well for trout fishing and all warmwater species all year so don’t expect that to change.

East Lake – East Lake fishing is holding up well and continues to produce browns and rainbows.  The hatches are coming off in the morning and evenings as well so bring plenty of Calibaetis imitations to match what’s coming off.  If the wind comes up drift with an intermediate sink tip and a San Juan worm.  It can be deadly and will keep you wind casting frustration to a minimum!!

Paulina Lake – Same as last week – Fishing for browns and rainbows has been very good.  It’s a calibeatis show so bring plenty to match the hatch.

Lower Deschutes River – BWO, PMD’s and cadis are all popping on the lower D.  With the cooler July fishing has been great!

John Day River – Bass fishing is great and will be until it cools off or there is a major thunder shower event in the canyon. The flow is low (380 CFS) so pontoons are about the only way of getting down river. This is also a great time to locate spots to walk into the river and walk and fish.  Just be aware that you don’t trespass when getting out.

Owyhee River – The river hadn’t gotten too much attention on our radar due to a cold spring and high flows that lasted into June but the river is now stabilized and is fishing well.  The fish are big here 16 to 25 inches and your flies are small (18 to 22) so 5 and 6x tippet is the norm.

It’s going to be a great weekend with warm dry weather so hopefully, you can get out and enjoy the rivers and lakes that are fishing well!

Fishing the higher elevation hike-in lakes can offer solitude, good fishing, and a chance to combine a couple of your favorite outdoor activities.

Bass fishing on the John Day remains somewhat slow, but the fish being caught tend to be a little larger.

Jubilee Lake is a great destination to beat the summer heat, and it’s scheduled to be stocked with trout this week.

Bass and walleye fishing in the Columbia River are good summertime bets.

McKay Reservoir crappie have been biting just before dark.

Trout fishing in Fourmile Lake has been excellent.

Fish Lake in the Wallowa Mountains has been stocked with more fish than in recent years, so anglers can expect fishing to be very good.

Phillips Reservoir has been stocked with approximately 14,000 legal-size and 4,500 trophy-size rainbow trout this year. ‘Nuf said.

The trail to Blue Lake in the Gearhart Wilderness is open and fishing was excellent this past weekend.

This time of year, the Blitzen and Chewaucan rivers can be good places to target native redband trout.

Fourmile and Anthony lakes are scheduled to be stocked this week.

We missed an update from Pete this week.

Ocean salmon fishing off the south coast continues to be good.

Ocean salmon fishing for Chinook salmon from Cape Falcon to Humbug Mt is open. The ocean opened to fin-clipped coho salmon on June 22. Chinook must be a minimum of 24-inches long and coho must be at least 16 inches. Fishing for salmon has been okay with Winchester being the most productive ports on the coast. Anglers have been averaging one fish per person. As of July 14, ocean salmon anglers have caught 26.3 percent of the fin-clipped coho quota.

Trout fishing is still decent at higher elevation lakes like Diamond and Fish, and anglers are still picking up trout in some valley reservoirs as well.

Summer steelhead numbers are increasing in the middle and upper Rogue. Now would be a good time to hit the water.

Bass fishing continues to be good in the mainstem and South Umpqua rivers, as well as area reservoirs and lakes.

Ocean salmon fishing off the south coast continues to be good.

Yellow perch fishing is picking up on Tenmile Lakes, with a few larger fish beginning to show up in the catch.

Striped bass continues to be very good on the Coquille and Umpqua rivers.

The Rogue River above Lost Creek Reservoir is scheduled to be stocked this week.

SW Washington –  The most recent report from WDF&W is from July 14th. You can access it HERE.