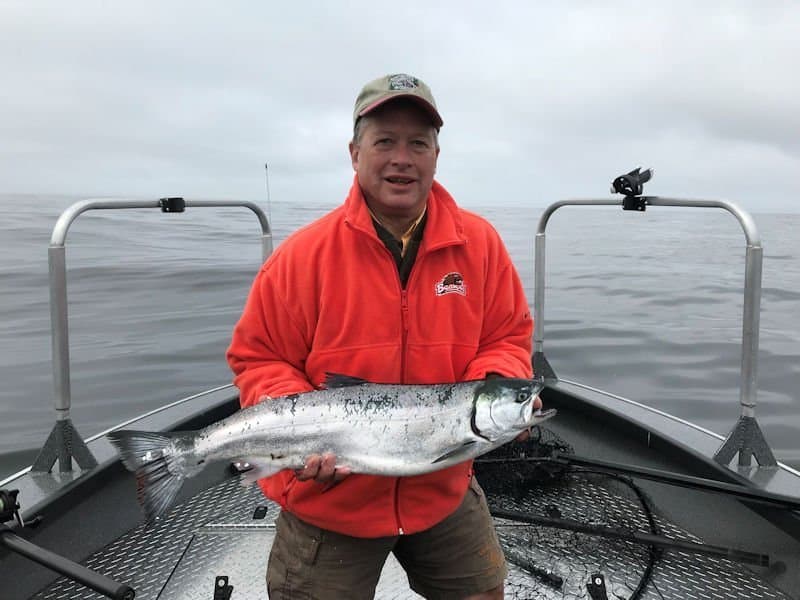 Willamette Valley/Metro – We are entering the final phase of opportunity for spring Chinook on the Willamette River. Portland Harbor trollers continue to see sporadic success at the head of the Multnomah Channel. Pro Trolls with size 3.5 spinners behind them should continue to produce results through the 4th of July holiday. After that, the run will effectively be over, leaving the river quiet until September coho start to show.

Shad fishing in the Oregon City area is tapering as well, but opportunity still exists.

The Clackamas and Sandy Rivers remain an option and likely the primary targets for metro anglers. Unfortunately, salmon and steelhead returns to both of those systems are also alarmingly low. The Sandy will remain the better option of the metro two, with late arriving spring Chinook and some summer steelhead on the menu for the next couple of weeks. Keep in mind that the best hatchery opportunity for spring Chinook will be downstream of the Bull Run River near Dodge Park. A late surge of fish is common in July. The Clackamas River continues to be a bust for hatchery spring Chinook, but some summer steelhead should be available upstream to McIver Park. Early mornings, small baits and spinners should produce some results before the onslaught of recreational rafters takes to the water by high noon.

Local lakes remain an option for trout anglers, moderate temperatures should keep fish on the bite. A surge of summer steelhead was rumored on the lower Columbia this week. It could make for decent action up to Bonneville Dam for the next three of four weeks. We are entering peak migration time for eastern bound steelhead, this is the time to take advantage of it.

Pro guide Jeff Stoeger (503-704-7920) of O2BFISHN reports, ” Well, this week’s report is on the slow side. I floated the lower river and never saw another boat.  Did see a few salmon moving upstream. Most of the guys are fishing the upper river from Oxbow Park to the mouth of the Salmon River. Most guys are using spinners and sand shrimp under a bobber. The river is running at summer time level and has great color.”

Northwest Oregon – Spring Chinook fishing remains challenging on Tillamook Bay but like other areas of NW Oregon, a late surge of salmon has become common. A minus tide series should make the upper bay a fair option, troll spinners on outgoing tide, herring close to high slack. The lower reaches of the Trask River may also be holding some spring Chinook.

District rivers including the Nestucca, Wilson and the Siletz down south should be fair options for summer steelhead. Small baits and hardware in the early morning should produce a few fish.

The Astoria Report – A friendly ocean will make coho fishing exciting this holiday week. Coho fishing has been great out of the lower Columbia with limits common for early risers. Fish gorge at first light, and then become more lethargic after 9:00 a.m. Some Chinook are showing in the catch as well. Fish by Buoy 1 or the CR Buoy for best results. Fresh anchovies is the bait of choice.

Some shallow water sturgeon anglers struggled this week as lower tide exchanges keep sturgeon concentrated in the deeper channels. There are hoards of hungry sturgeon on the bite from the Astoria Bridge to Miller Island.

Bottomfishing for seabass remains very productive from Cannon Beach to the south jetty at the Columbia mouth. Albacore haven’t made an appearance just yet, but are due anytime this month.

From avid angler Tim Moran “Happy 4th of July everyone!”

Metolius River – well you may need your own rock to stand on but it should fish really good. Lots of bug activity and the yellow sallies and PMD’s are out and on the wing.

Fall River – this gem has really been good lately.

Prineville and Haystack are both producing some really nice fish. Bass fishing has been very good all year and should be great this weekend.

Wickiup – No word this week on Kokes but I did see some nice browns come out of the lake last week.

South Twin is always a popular on the 4th. Lots of PWC’s and swimmers in the afternoon so fish early. There will be plenty of freshly stocked trout to go along with the bigger hold overs.

Davis Lake – Bass fishing should be great and fish will be should be patrolling the weed edges so using bigger woolybugger patterns and minnow flies should take bass.

Lava Lake – No first hand report but it should be good.

East Lake – Fishing has been really good on East. Browns to 24 inches have been caught recently on dries in the mornings and evenings.

Trout fishing has been good in East Lake, and Paulina was stocked last week.

The best bet for fishing in the Klamath Basin will be Fourmile Lake for stocked rainbow trout, Lower Williamson River for native redband trout, Wood River for brown trout and Lake of the Woods for bass.

Campbell and Deadhorse Lakes were stocked last week and fishing has been good.

Water levels in Deep Creek and the Chewaucan River have dropped and fishing for redband trout should be excellent.

Holbrook Reservoir, Anthony Lake, Fourmile Lake, Lofton Reservoir, Miller Lake and Lake of the Woods are all scheduled to be stocked this week.

The Jubilee Lake kids fishing derby will be hosted by the US Forest Service on July 6 from 9 a.m. to 1 p.m. The event is free for kids under the age of 14. The lake will be stocked prior to the event, and fishing should be good for rainbow trout.

ODFW trout plants have shifted to central Oregon and some of the area’s most popular trout fisheries were stocked last week.

While East Lake’s new fish species proved quite popular – especially the brown trout. There always seemed to be something missing with the brook trout gone.

Stocking brookies in East Lake shouldn’t be problematic as the lake is a closed system.

East Lake is also a prime choice to catch decent-sized brown trout from the bank.

It’s getting to be that time of year when the ODFW encourages anglers to fish early mornings rather than in the afternoon – especially if they plan to release their catch.

As for local fishing reports, the Umpqua River shad run is essentially over except for a few fish being caught at Sawyers Rapids.

The pinkfin run is still going strong in the lower Umpqua River above Winchester Bay.

Fishing for striped bass on Smith River picked up last week with almost all of the stripers caught being quite small.

There haven’t been many recent reports of recent smallmouth bass catches from the Coquille River.

Ocean salmon fishing for Chinook salmon from Cape Falcon to Humbug Mt is open. The ocean opened to fin-clipped coho salmon on June 22. Chinook must be a minimum of 24-inches long and coho must be at least 16 inches.

Bass fishing has been good in Expo Pond, and for the lucky angler that caught a 7-pound bass last weekend fishing was very good.

While fishing has been slow in the middle Rogue, reports indicate there are more than a few summer steelhead hanging out.

Striped bass have been biting well in the Coquille River. The smallmouth bass bite is also good at this time in the mainstem and South Fork Coquille.

A late resurgence of American shad has appeared in the last week near Coquille.

SW Washington –  The most recent report from WDF&W is from June 26th. You can access it HERE.