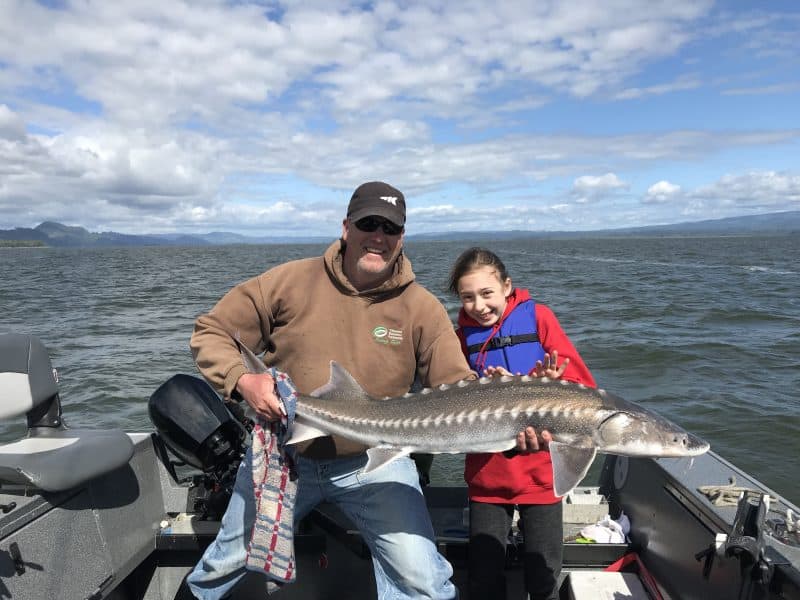 Willamette Valley/Metro – Spring Chinook trollers fishing the Portland Harbor and the Multnomah Channel are averaging a salmon for nearly every 10 rods days of effort. The mark rate remains around 70% with fish falling to Pro-Trolls and size 3.5 spinners in the warming Willamette. Herring remain an option as well, but fish seem most responsive to hardware in the warmer waters. There was some effort in the upper reach near Oregon City, but no springers were tallied here.

Shad effort and catch dominate the Oregon City area with thousands of shad landed every week. The action should remain robust for another 2 weeks before it starts to taper.

Shad fishing at Bonneville remains excellent, especially in sunny days. Hundreds of thousands of shad are still crossing Bonneville Dam daily, making them an easy target at the shad rack.

Summer steelhead catches on the lower Columbia remain dismal and there will be no summer Chinook opener on June 15th this year, due to a poor forecast.

The Clackamas River has yet to yield a hatchery spring Chinook for creel checkers this season; this may be unprecedented. Meanwhile, bank anglers averaged a summer steelhead for every 15 rods last week, a sign the fishery is finally starting. Soon however, the river will be inundated with rafters and the bite will suffer because of it. The same rings true with the Sandy River.

Sandy River steelheaders also saw a jump in action this week and a few more spring Chinook are hitting the deck here too. Concentrate salmon effort below Bull Run River near Dodge Park and steelhead action will be best downstream of Cedar Creek. More trout opportunities for metro anglers this week although blistering temperatures won’t help the bite. Anglers and fish should get a reprieve by the weekend.

Northwest Oregon – Spring Chinook action on Tillamook Bay remains challenging but soft “hold-over” tides this weekend (In the afternoon) should spur a bite for salmon along the jetties on the last half of outgoing tide this weekend. Troll herring on the bottom for best action.

Seas look friendly for offshore opportunities such as rockfish and crab. Unfortunately, halibut season won’t be open despite a large portion of the quota remaining for sport anglers to harvest. Back-up dates will be announced any day now.

District rivers remain very low, clear and are warming, with no reprieve in sight. This is making for challenging fishing conditions for salmon and steelhead on the Wilson, Trask and Nestucca systems. Managers decided to close the popular Hatchery Hole on the Trask River effective today to protect the limited broodstock already in the river.

Crabbing in the estuaries of the north coast has been fair to good. Fresh shad make excellent bait this time of year. Soft tides this weekend should make Tillamook, Netarts and Nestucca Bays productive.

Lower Columbia – With the sturgeon season now closed, effort has dropped despite productive fishing still in the queue. Warming water temperatures and an influx of anchovies to the estuary should stimulate the bite over the next several weeks. Fresh bait can be hard to come by so call ahead for availability.

Annual monitoring of the Crooked River will take place June 17-21 from the Big Bend campground to Cobble Rock campground. Anglers are encouraged to avoid this reach during the sampling.

Chinook harvest continues on the Hood River with the majority of the run having reached the river.

The mountains in northeast Oregon are green and beautiful, and with wildflowers in bloom, now is a great time to grab a map (or GPS) and take a tour of the stocked forest ponds.

Black drakes are still hatching on the Sprague River and flows are perfect for fishing.

Best bet for fishing in the Klamath Basin continues to be Lake of the Woods for stocked rainbow trout, Upper Williamson River for native redband trout, Wood River for brown trout and Gerber Reservoir for crappie.

Holbrook and Lofton Reservoirs have been stocked with trophy trout three times in the last few weeks.

Cottonwood Meadows is accessible, and fly-fishing has been excellent.

The Owhyee River is scheduled to be stocked this week with 3,000 legal-size trout.

From Pete Heley at PeteHeley.com

As for hot local fisheries, the redtail surfperch spawning in the Umpqua River above Winchester Bay went on a torrid bite last week.

The last two times I drove into Tugman Park , there were at least six anglers fishing off the fishing dock. The only time I’ve seen that many people fishing off that dock is when the lake’s warmwater fish were active.

Western Oregon trout plants are pretty much over until fall. Lakes still holding fair numbers of planted trout include Cleawox., Saunders and Eel.

The run of female redtail surfperch into the lower Umpqua River above Winchester Bay is still going on.

Although it is still early in the run, there have been a number of boat limits were caught last weekend and the run should last through July. Fishing success has been spotty.

Anglers fishing the beach for surfperch would be well-advised to trade in their monofilament line for s super braid.

The hottest local fishery continues to be Umpqua River shad fishing. The Yellow Creek area is still producing well as of last weekend, but most of the fishing pressure has shifted to Sawyers Rapids.

Bank anglers can catch some shad on the Highway 38 side of the river by fishing the chute.

Because of rough ocean conditions, it appears that the spring all-depth halibut season will not meet its quota of 171,103 pounds. June 6-8 is the last fixed opener for the spring season and back-up dates will every other Thursday through Saturday until the spring quota is met or approached.

The summer all-depth halibut season is set to start on Friday, August 2nd with back-up dates every other Friday and Saturday until the summer quota is met or approached.

Ocean salmon fishing at least for cohos should be much better this season. The selective or finclipped ocean coho season will run from June 22nd through August 25th or until the 90,000 finclipped coho quota is met.

Chinook salmon fishing in the ocean is ongoing and slated to run through October.

It seems that there is a growing amount of fishing pressure directed at walleyes in Lookout Point Reservoir including some guides.

One can reasonably expect ODFW trout plants into coastal waters to be slowing down as many waters become less suitable for receiving trout plants.

Loon Lake is western Oregon’s best bluegill fishery – and it’s not even close.

Loon Lake is also our area’s best spot to catch a foot-long crappie.

Pete Heley works parttime at the Stockade Market & Tackle, across from A’ Dock, in Winchester Bay where he is more than happy to swap fishing info with anyone.

You can see more from Pete by becoming a member of The Guide’s Forecast.

With the current blast of warm summer temperatures, this would be a good weekend to head to the higher (and cooler) elevation lakes in the Umpqua district for trout fishing.

Trout fishing has picked up on Diamond Lake and the large swarms of midges have died down.

Galesville has been stocked with a lot of “trophy-size” trout this year and fishing has been good.

Bass fishing has been good throughout the South Umpqua River.

Anglers have been catching the spring Chinook and juvenile coho put into Cooper Creek Reservoir.

Butterfield Lake was stocked this week with 140 surplus trophy trout, many of which were five pounds or more.

Anglers are still catching shad out of the mainstem Umpqua, especially near Cleveland Rapids.

Hemlock and Fish lakes, and the Rogue above Lost Creek are scheduled to be stocked this week.

The Rogue River above Lost Creek Reservoir will be stocked this week.

Ocean salmon fishing for Chinook salmon from Cape Falcon to Humbug Mt is open. Chinook must be a minimum of 24-inches long. The ocean opens to fin-clipped coho salmon on June 22.

SW Washington –  The most recent report from WDF&W is from June 2nd. You can access it HERE.