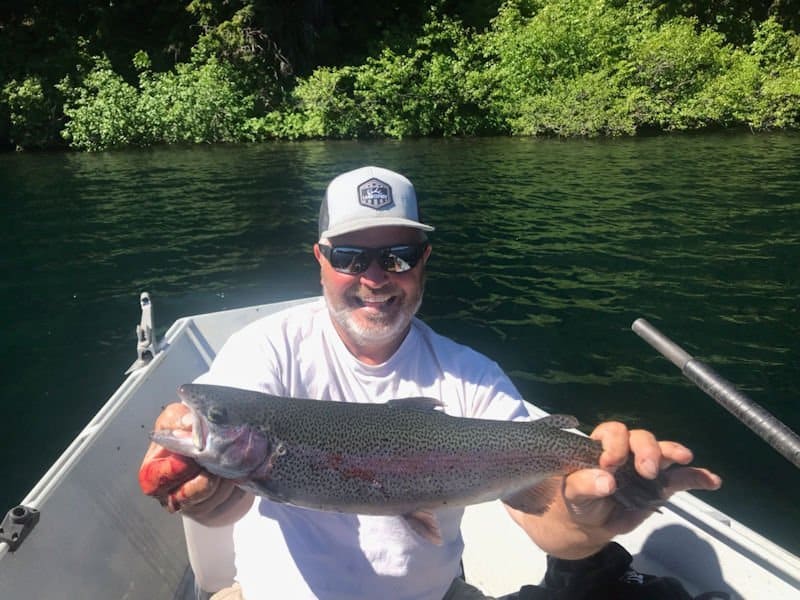 Shad fishers are still putting in time downstream of the I-205 Bridge although catches aren’t as robust as they were a few weeks ago. It’s always a surprise when a Chinook hits shad gear, it may be good to be prepared for such “luck.” Shad aren’t leader-shy.

Sturgeon anglers are having a harder time finding larger fish as many have migrated downstream to the estuary for their summer feeding program; anchovies are on the menu. Not so coincidentally, frozen anchovies produced fair catches late last week for shakers in the Portland Harbor.

With next to non-existent catches of spring Chinook, and a depressed return of summer steelhead, anglers have largely written off the Clackamas River. Soon, rafters will out-number anglers so only early morning anglers will stand a chance. The Clackamas hatchery is making some significant upgrades which should provide better opportunity in the future, but it’s been a long dry spell for a once significant fishery.

The Sandy River is only producing slightly better. Spring Chinook catches are still weak, but at least there’s hope for a modest return this year. Summer steelhead action is better on the Sandy system as well, but anglers are still having to endure the raft hatch so fish early here too.

Pro guide Jeff Stoeger (503-704-7920) of O2BFISHN reports, ” This weeks report is showing that there is fish in the entire river. Most of the action has been Oxbow to Cedar Creek. I have a report that one hatchery Chinook was caught this last week on a spinner. It was caught on a number 4 Blue Fox spinner with a silver plated blade. There was also reports that there were summer fish also caught on spinners and beads. The river has had some color to it due to snow melt. The weather temps have gone back down to normal.

Northwest Oregon – Spring Chinook action remains challenging for Tillamook Bay anglers. We’re still in the window of peak opportunity and in recent years, this time of the season has produced some surprisingly fair fishing. It’s a mediocre tide swing this weekend, which should produce catches for trollers in the upper bay in the morning, and the lower estuary late in the afternoon. We’re approaching the longest day of the year, spring Chinook anglers should take advantage of it.

Managers tacked on an additional 6 days due to unmet quota in the south of Cape Falcon halibut fishery. The first 3-day set started today (June 20th) and runs through the 22nd. Pacific City and Garibaldi should produce fair catches.

The much anticipated mark select coho fishery starts south of Cape Falcon on Saturday. It’s likely to be the highlight of the year. Liberal quotas will offer up ample opportunity for high quality ocean coho for the next several months. Chinook are allowed for retention as well, but read regulations carefully. Nearshore bottomfishing for sea bass remains excellent.

Annual monitoring of the Crooked River will take place June 17-21 from the Big Bend campground to Cobble Rock campground. Anglers are encouraged to avoid this reach during the sampling.

Chinook fishing on Hood River has been pretty consistent the last two weeks.

Trout fishing on the lower Deschutes has been good. And now that the spring hatches are over, the crowds have really diminished leave more elbow room for anglers.
East Lake has been the hot spot for trout lately.

The road to Jubilee Lake is open to vehicle traffic and fishing should be good for holdover rainbow trout.

The mountains in northeast Oregon are green and beautiful, and with wildflowers in bloom, now is a great time to grab a map (or GPS) and take a tour of the forest pond scheduled to be stocked this week.

Black drake mayflies are still hatching on the Sprague River and flows are perfect for fishing.

Best bet for fishing in the Klamath Basin continues to be Lake of the Woods for stocked rainbow trout, Upper Williamson River for native redband trout, Wood River for brown trout and Gerber Reservoir for crappie.

Holbrook and Lofton Reservoirs have been stocked with trophy trout three times in the last few months.

Campbell Lake is now accessible and fishing should be good for rainbow and brook trout.

Water levels in the Chewaucan are dropping – expect fishing for redband trout to start getting really good.

The Owhyee River was stocked last week with rainbow trout.

Holbrook Reservoir, Lake of the Woods, North Fork of Pine Creek and Lofton Reservoir are all scheduled to be stocked this week.

No updates from Pete this week.

Ocean salmon fishing for Chinook salmon from Cape Falcon to Humbug Mt is open. Chinook must be a minimum of 24-inches long. The ocean opens to fin-clipped coho salmon on June 22.

Trout fishing has been holding up well in several area reservoirs, including Cooper Creek, Galesville, Howard Prairie and Lost Creek.

Trout fishing continues to be good in Diamond Lake.

Angles have been catching smallmouth bass throughout the South Umpqua River.

Striped bass fishing has been good in the Coquille basin.

Bass and other warmwater fishing is good in several area waterbodies such as Tenmile Lakes, Eel Lake, Expo Pond and Loon Lake, to name just a few.

Medco Pond, Lost Creek Reservoir and the Rogue River above Lost Creek are scheduled to be stocked this week.

SW Washington –  The most recent report from WDF&W is from June 2nd. You can access it HERE.