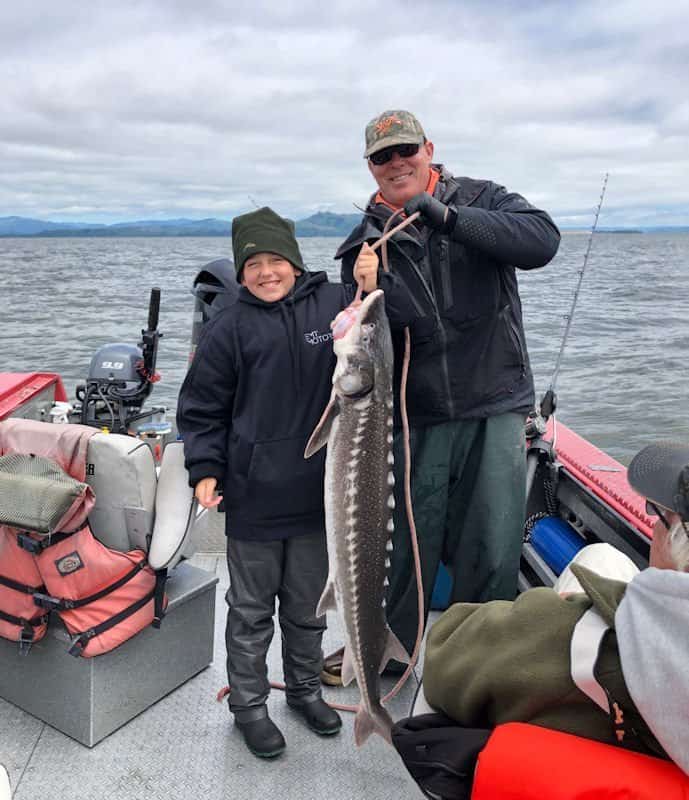 Willamette Valley/Metro – The Willamette River continues to produce fair-at-best results for spring Chinook, but trollers working the river downstream of the St. Johns Bridge have been doing fair recently. No matter how poorly the overall spring Chinook season has performed through the traditional peak season period (late April – May), there seems to be another June – early July “second season” for trollers working the Portland Harbor. Some of those fish are destined for the Clackamas River, but others continue their migration to upper Willamette River hatcheries. Pro-Trolls with spinners or small herring consistently take fair numbers of fish from year to year.

Meanwhile, effort remains low but present in the Oregon City area for spring Chinook, but the bigger story is the tens of thousands of shad caught in recent weeks by sport anglers, both from the bank and boats just downstream of the I-205 Bridge. Green grubs, Dick Nite spoons and simple nickel swivels with siwash hooks are taking good numbers of shad. The action has been great for 3 – 4 pound fish.

The Clackamas River continues to disappoint. Three wild spring Chinook were finally tallied for the week’s effort. A total of 3 spring Chinook and 4 summer steelhead have been recorded from the Clackamas River for the last 5 weeks of fishing. Nearly 1,000 angler days were put out for that disappointing catch. The Sandy River is only slightly better. Although there is no creel program, a few more spring Chinook are being caught in the lower reaches of the river, a later showing has been the norm in recent years. Summer steelhead are scarce it seems, but anglers fishing from Cedar Creek to Oxbow are catching a few.

Pro guide Jeff Stoeger (503-704-7920) of O2BFISHN reports, ” There are still very bright springers still entering the river. You can see the fish move up the lower river in small pods of fish. A well known guide that lives on the river reported to a fishing buddy that he was able to watch pods of fresh fish swim past his house. So if your looking to go after springers, look towards the lower river. There will be fish scattered through out the river with most of the hatchery fish stacking up at the mouth of Bull Run. The bait of choice will be either sand shrimp or prawns or good quality eggs. The steelhead are also scattered through out the river all the way up to Cedar Creek.

Northwest Oregon – Spring Chinook catches from lower Tillamook Bay were fair during the low tide exchanges anglers took advantage of. The Ghost Hole and the north jetty inside the bay produced fair catches overall, giving anglers hope that there will be a fair return of spring Chinook to the coastal systems in Tillamook. Stronger tides this weekend will place effort back into the upper bay where spinners and plugs will take fish this weekend.

The Trask River seems to have fair numbers of spring Chinook, but they’re not necessarily in the biting mood. Low, clear water conditions make fish wary of angler’s offerings so use light leaders and small baits to entice salmon here.

Summer steelhead are available in fair numbers in the Wilson, Nestucca, Three Rivers and the Siletz systems.

Trout season is open on most Tillamook area systems but check regulations before venturing out.

Anglers are anxiously awaiting an offshore June 22nd salmon opener, which should be productive for coho salmon.

Lower Columbia – Sturgeon catches on the lower Columbia were tracking to pre-season expectations. Managers are very unlikely to provide an extension. Catch and release fishing will be great well into August and I (Bob Rees) will be conducting both 1/2 and full day catch and release sturgeon fishing trips at a special rate for TGF subscribers. When the offshore salmon season opens on June 23rd, we can combo up that trip to take advantage of the WHOPPER coho return coming back this year. Call or email for details (503-812-9036 or brees@pacifier.com) for details. Meanwhile, check out Terry Otto’s sturgeon story from The Columbian in Vancouver HERE.

Crane Prairie –  Still fishermen are getting fish on powerbait or a worn floated off the bottom. Fly guys are getting fish on chironomids.  Bass fishing has been really good.  A cold front will push through today and Saturday, most likely putting the fish off the bite but warm weather returning next week should get the fish going again!

Wickiup –  Broken record I know but it’s Still kicking out easy limits.  The fish are starting to move a bit deeper but some are still being taken at or near the top or down to 20″.

North and South Twin Lake – Fishing is good on both lakes. North Twin is less crowded and has good fly fishing for rainbows and brookies.

Odell Lake –  As reported last time from the diehards at Shelter Cove – fishing is good, limits are being caught with regularity.

Prineville Reservoir:   The reservoir is very good right now for bass and crappies. Trout are being caught with regularity up near the dam from shore.  Fish to 5 lbs. have been taken.

Lower Deschutes River –  There are pockets of the big stoneflies around still and fish will still be looking for them but with rain in the forecast that usually means some great mayfly hatches.

East/Paulina Lakes – I think it’s supposed to snow up there this weekend so go at your own risk.  By Tuesday it will be warm and fishing should be really good.

The Deschutes between Lava and Crane is open and fishing was very good and should continue for a few weeks.

It’s going to be a tough weekend weather wise but with warm dry weather returning, mid-week should be great!

Ocean salmon fishing for Chinook salmon from Cape Falcon to Humbug Mt is open. Chinook must be a minimum of 24-inches long. The ocean is closed to coho salmon.

Chinook harvest has picked up on the Hood River in the last two weeks as the majority of the run has reached the river.
Anglers are catching their limits of kokanee on Wickiup Reservoir.

Both Walton Lake and Antelope Flat Reservoir were stocked the week of May 27. In addition, recent sampling showed good numbers of holdover fish up to 18-inches. Fishing should be good!

The crappie (and mosquitoes) are biting on Cold Springs Reservoir as the fish move into the shallows to spawn.

Trout and kokanee fishing have been good on Wallowa Lake.

The mountains in northeast Oregon are green and beautiful, and with wildflowers in bloom, now is a great time to grab a map (or GPS) and take a tour of the stocked forest ponds.

Best bet for fishing in the Klamath Basin is Lake of the Woods for stocked rainbow trout, Upper Williamson River for native redband trout, Wood River for brown trout and Gerber Reservoir for crappie.

Look for the phenomenal hatch of salmonflies to continue this week on the Klamath River from the Powerhouse to the CA border. Golden stoneflies should also be hatching in good numbers.

Fishing has been excellent at Heart Lake, where all fishing methods seem to produce full stringers of trout.

Holbrook and Lofton Reservoirs will be stocked with more trophy trout for the third week in a row!

Cottonwood Meadows is accessible, and fly-fishing was excellent last weekend.

The run of female redtail surfperch into the lower Umpqua River above Winchester Bay is still going on.

Although it is still early in the run, there have been a number of boat limits were caught last weekend and the run should last through July. Fishing success has been spotty. Most surfperch anglers limit their fishing success by avoiding all logic when it comes to their fishing strategies.

Anglers fishing the beach for surfperch would be well-advised to trade in their monofilament line for s super braid. The advantages are numerous.

The hottest local fishery continues to be Umpqua River shad fishing. The Yellow Creek area is still producing well, but most of the fishing pressure has shifted to Sawyers Rapids.

Bank anglers can catch some shad on the Highway 38 side of the river by fishing the chute entering the large shallow pool about 500 feet below the rapids.

Because of rough ocean conditions, it appears that the spring all-depth halibut season will not meet its quota of 171,103 pounds. June 6-8 is the last fixed opener for the spring season and back-up dates will every other Thursday through Saturday until the spring quota is met or approached.

The summer all-depth halibut season is set to start on Friday August 2nd with back-up dates every other Friday and Saturday until the summer quota is met or approached..

Ocean salmon fishing at least for cohos should be much better this season. The selective or finclipped ocean coho season will run from June 22nd through August 25th or until the 90,000 finclipped coho quota is met.

Chinook salmon fishing in the ocean is ongoing and slated to run through October.

It seems that there is a growing amount of fishing pressure directed at walleyes in Lookout Point Reservoir including some guides.

One can reasonably expect ODFW trout plants into coastal waters to be slowing down as many of the waters become less suitable for receiving trout plants.

Loon Lake is western Oregon’s best bluegill fishery – and it’s not even close.

You can see more from Pete by becoming a member of The Guide’s Forecast.

There will be a free Family Fishing Event at the Denman Wildlife Area near Central Point on Saturday, June 8 from 10 a.m. to 2:30 p.m. ODFW will provide gear for you to use and ODFW staff will be on hand to show you how to use it
Now would be a good time to get out to the higher elevation lakes in the Umpqua district for some early season trout fishing.

Chinook fishing has been fair to good throughout the Rogue.

Huge numbers of shad have been coming out of the mainstem Umpqua, especially neat Cleveland Rapids. Shad enthusiasts should also check out the Coquille River.

A few salmonflies have hatched in the upper Rogue River around Casey Park so expect topwater action for trout and steelhead to ramp up.

Striped bass should be congregating to spawn in upper tidewater of the Coquille River, and their feeding/catchability may decline during spawning.

Many SW area lakes and ponds were stocked recently for Free Fishing last weekend, so trout should still be available in those waters.

The Rogue River above Lost Creek Reservoir will be stocked this week.

The most recent report from WDF&W is from May 29th. You can access it HERE.