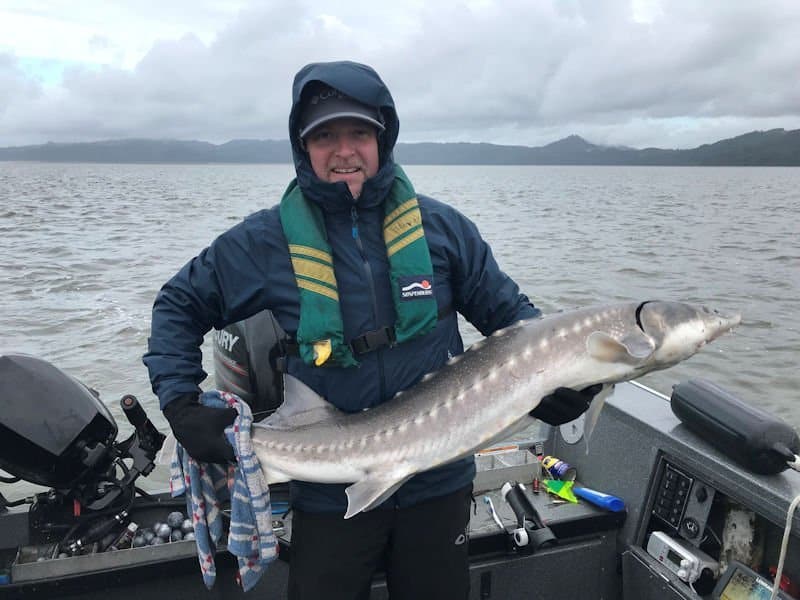 Willamette Valley/Metro – It appears as if the spring Chinook run on the Willamette River is not over. Throughout the river, from the Portland Harbor to Oregon City, anglers witnessed improved catches from the previous weeks, when hot, sunny weather seemed to quell the bite. We’re still in stable flows and water clarity, while still in peak season for this fishery.

Flow in Oregon City is very low so trollers have taken over the scene there. Pro Trolls and spinners are taking sporadic catches, every day is different despite fair numbers of fish in the area. Sellwood has produced fair catches recently with most fish falling to Pro Trolls and spinners as well. Once the water temperatures exceed 60 degrees, hardware is a good strategy.

Cooler and cloudy weather has been an added benefit lately and anglers should take advantage of these conditions. This weather pattern isn’t good for shad fishing, and shad are in the Oregon City area in fair numbers.

Tributary fisheries remain disappointing. The Clackamas River remains void of spring Chinook and summer steelheading has remained challenging despite favorable water conditions. The upper reaches are holding some willing steelhead, but angling success remains low.  The Sandy River is only slightly better with a stronger run of spring Chinook, and fair-at-best summer steelhead fishing right now. Both runs should be improving in the coming weeks. Remember that hatchery spring Chinook on the Sandy are most prevalent downstream of the Bull Run River near Dodge Park.

Shad are present in fair numbers in the Willamette, but it’s best to choose a sunny day when you decide to take part in this fishery.

Jack counts at Bonneville Dam has taken a turn for the better. It seems as if we may have hit the bottom of the decline on the mainstem Columbia this year if jacks continue upward momentum. A robust trout stocking schedule continues for Willamette Valley lakes, rivers, and reservoirs. Check the ODF&W listings for the systems in your geographic area. Lake conditions are ideal for trout and kokanee.

Pro guide Jeff Stoeger (503-704-7920) of O2BFISHN is on a much-deserved vacation this week. We look forward to having him back in the very near future! Have a great time Jeff and family!

Northwest Oregon – There was sporadic spring Chinook success in upper Tillamook Bay about ten days ago. Trollers working the Memaloose area did well early last week. Tides soften this weekend however, making the lower bay around the inside of the north jetty the better option during what has historically been peak season on the bay. Troll herring near the bay bottom on the last half of outgoing tide and high tide on the bay. Bay and ocean crabbing should also be a good option on this tide series.

Summer steelhead should be available in fair numbers on the Nestucca and Wilson, as well as Siletz River systems. Trout season on the coastal systems opened up yesterday (May 22nd).

Seas have been a bit too rough for fun halibut fishing. Essential trade winds will likely keep the ocean sloppy into the weekend. Newport remains the most productive, but experienced captains are doing well out of Garibaldi.

Sturgeon fishing has remained challenging out of Astoria ever since the opener (May 13th), which proved the most productive to date.

Crane Prairie –  Fishing is holding up on Chironomids in red and red/black and balanced leeches. Still, fishermen are getting fish on powerbait or a worn floated off the bottom.

Wickiup –  It’s Still kicking out easy limits.  The fish are at or near the top or down to 20″ so keep some of your rigs at different depths until you find them…you all know the drill …: wedding rings,

South Twin Lake – Fishing should be good but I’m betting it’s a zoo this weekend. If you want to get away from the crowds fish the sister lake… North Twin.

Odell Lake –  Report from the diehards at Shelter Cove is fishing is good with jigs and trolling a flasher and a hoochie. Limits are being caught with regularity.

Prineville Reservoir:   The reservoir probably muddied up with some pretty major rains lately in the area…it may be off a little but Bass should be active in the shallows.

Lower Deschutes River – Okay to very good fishing are the reports.  It depends on where you are and when you’re there.

Our very own Bob Rees was on the river today and reported decent action in the WS to TC section.  If Bob can catch fish on a fly then it’s probably worth going! :)  I’m sure the river will be very busy this weekend which will make fishing tough.  You may need to bring your own rock to stand on and all of the boater passes from Warm Springs to Macks are sold out.

East/Paulina Lakes – My good buddy Greg was up there last weekend…snow and wind pushed him off the lake but fish were active in the shallows before the storm moved in.

The Deschutes between Lava and Crane is open this weekend… Fishing should be very good.

Bass and crappie fishing have been excellent in Prineville Reservoir.

Both Walton Lake and Antelope Flat Reservoir will be stocked this week. In addition, recent sampling showed good numbers of holdover fish up to 18-inches. Fishing should be good!

Crappie should be biting in Willow Creek, Cold Springs and McKay reservoirs.

Smallmouth bass anglers should hit the miles (and miles) of rocky shoreline along the Columbia River. Remember, the shallow bays warm first!

Flows on the Wood River, Sprague River, and Upper Williamson River are dropping to very good, fishable levels and insect hatches are excellent this year.

Best bet for fishing in the Klamath Basin is Lake of the Woods for stocked rainbow trout, Klamath River below JC Boyle Dam for native redband trout, Wood River for brown trout and Gerber Reservoir for crappie.

Look for the phenomenal hatch of salmonflies to occur this week and next on the Klamath River from the Powerhouse to the CA border. Golden stoneflies will also be hatching in good numbers.

Flows are perfect for fishing on the Sprague River, and the black drakes are hatching.

Cottonwood Meadows is accessible, and fly-fishing can be excellent this time of year.

Pending news that seems to have everybody’s attention is the decision to reduce the daily limit for wild or unclipped chinook salmon to one fish on many south coast streams. The daily limit will remain at two fish on the Rogue and Umpqua rivers.

On the Coos Basin the daily limit for unclipped chinook salmon is one fish from either the Coos or Coquille rivers with a seasonal limit of five fish from August 1st through December 31st with no more than two unclipped chinooks coming from the Coquille River – which is closed to chinook angling above the Highway 42S crossing near Sturdivant Park..

The daily limit on the Chetco River is one unclipped chinook per day with a seasonal limit of two unclipped chinook from August 1st through December 31st – the only open water is from the mouth up to river mile 2.2

These upcoming changes regarding the retention of unclipped chinook affect every Oregon coastal river that hosts chinook salmon runs in slightly different ways and I urge anyone planning on fishing for salmon this fall to read the complete proposal on the ODFW website.

An ocean fishery for chinook salmon in the Brookings area will begin May 25th and run through September 2nd.

The hottest, most consistent fishing in our area remains shad fishing on the Umpqua River.

Surprisingly, the next hottest local fishery has been the striper fishing on the Smith River.

Because of muddy water, the Coquille River has received little fishing pressure directed at striped bass so far this year, but recently gave up a dozen stripers weighing more than 15 pounds in the week before the most recent rains muddied the river once again.

The two top float fishing streams in our area are rounding into prime fishing shape. While Siltcoos River won’t open to fishing until May 22nd, the river offers an easy float down to the dam which is located more than two miles below the lake. Siltcoos River has a fair population of largemouth bass and yellow perch and some surprisingly large trout (both rainbows and cutthroats).

The other floatfishing option is Tenmile Creek between the lake and the railroad trestle. Although the trestle is about four stream miles below the lake, the hike back to your rig via the railroad tracks is only about a mile.

No log jams have been reported on Tenmile Creek this year and the best fishing areas seem to be the most narrow areas with streamside brush. Largemouth bass and rainbow trout are the most common catches.

Local fly anglers should consider Saunders Lake where the most recent trout plant seems to have generated a considerable amount of surface activity. Trollers are having very good success on Eel Lake for planted rainbow trout with a few native rainbows and cuts along with a few carryover rainbows.

Ocean salmon fishing for Chinook salmon from Cape Falcon to Humbug Mt is open. Chinook must be a minimum of 24-inches long. The ocean is closed to coho salmon.

Many of the area’s rivers and streams reopen to trout fishing this week (May 22).

Now would be a good time to get out to the higher elevation lakes in the Umpqua district for some early season trout fishing.

Chinook fishing has been fair to good throughout the Rogue.

Anglers have been catching shad on Coquille and mainstem Umpqua rivers. Expect good fishing through May.

Look for bass and other warmwater fishing to be good in waterbodies throughout the zone, including Ben Irving Reservoir, Cooper Creek Reservoir, Eel Lake, Expo Pond, Galesville Reservoir, Loon Lake and Tenmile Lakes.

Waterbodies scheduled to be stocked the week of May 22 include Applegate Reservoir, Rogue River above Lost Creek, Willow Lake, Howard Prairie Reservoir and Spalding Pond.

SW Washington – The most recent report from WDF&W is from May 15th. You can access it HERE.