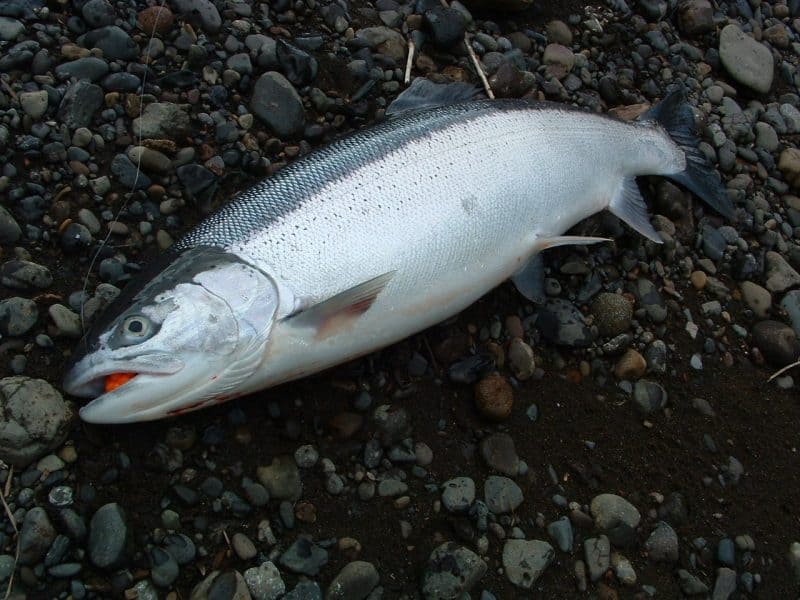 Willamette Valley/Metro – With the re-opener of the Columbia, there was some interest in salmon fishing both above and below Bonneville Dam. This time of year, folks look upriver to target late-running coho that are still in the reservoirs, waiting to enter their home tributaries.

The update from both the salmon opener and the sturgeon opener comes right from ODF&W’s Jimmy Watts: Jimmy reports, “During October 18-20, coho anglers on the lower Columbia made 364 trips and caught 45 adult coho (34 kept and 11 released) and 86 adult Chinook (released).  On Saturday October 19, sturgeon anglers made 331 trips and caught five legal sturgeon and released 20 sublegal and four over-legal sturgeon.” Not bad, but let’s watch that Chinook handle anglers! Please stay away from productive Chinook spots!

Pro guide Jeff Stoeger (503-704-7920) of O2BFISHN reports on the Sandy River, “Over the weekend, we saw the Sandy take a large jump in height. We saw the river go up from 8ft to 11ft over the last 5 days. The river last Wednesday was 8ft and by Tuesday, it was 11ft. When you see this report, the river will have gone down by over a foot. The river was running chocolate brown and has started to clear and should be clear over the next few days with the possibility of the river taking a small spike if the rain predicted for Friday comes to fruition. The long range forecast shows the river leveling off to 9ft by the weekend. The river has fish spread throughout the entire river. Most of the fish are concentrated from Cedar Creek to Oxbow Park.”

The Eagle Creek Fish Hatchery reports 3,000 adult coho have returned to the hatchery as of October 22nd.  At this rate, it seems likely that this year’s run will surpass last year’s return of 3,700 fish, but only time will tell. Notable however is that many of the fish have passed through the Clackamas system and now reside in Eagle Creek. That will certainly put a damper on Clackamas River success, but there will still be more fresh fish coming.

Northwest Oregon – North coast rivers witnessed the rain freshet we’ve all been waiting for. Chinook fishing took off in the rivers, tidewater reaches and the estuaries of many north coast systems. Although it was predicted to be slower than last year’s return, some are saying it has been notably better. Hopefully, spawning ground counts show that same result.

Now’s the time to learn more about drifting our bevy of North Coast Rivers. Technical Report #8 Driftboat Fishing on the North Oregon Coast gives some deep insight as to how to catch our region’s salmon and steelhead. Pick up your copy NOW and peruse through the other Technical Report options for crabbing, herring trolling and bobber fishing while your at it!

The Trask tidewater and mainstem produced fair to good catches once the river level came down early this week. The main push of Chinook and a few remaining coho headed upstream where both bank and driftboat anglers could take advantage of it.

Fish were also caught in the Wilson River, it’s been a rare treat to have a rain event in mid-October for Wilson River anglers to take advantage of.

It’s still early for the Kilchis to kick off, but there was a few Chinook present early in the week.

The North Fork Nehalem reports fairly slow coho fishing, but a few fish are being caught off the handicap ramp.

The mainstem Nehalem saw another bump in river levels which will put it out for another few days. There should still be a few late-running Chinook headed upstream when it does clear.

The Nestucca, Siletz and Alsea Rivers all saw nice hydrological bumps last week that put fresh fish into the upper reaches with fresher ones on their heels migrating through the extensive tidewater reaches. As the rivers drop, tidewater or nearby will once again become the better option.

Anglers were sidelined for ocean fishing this past week, but windows of opportunity should come about in the next several days. Ocean crabbing remains closed, but bay crabbing is holding up despite the recent rain freshet.

See the full Tillamook report AND FORECAST by being a paid subscriber or see last week’s edition here.

Tim is elk hunting this week so check here’s his report from last week, which certainly has plenty of application for this week too:

Crane Prairie –  Fishing Crane (or any of the cascade lakes for that matter) will be challenging in the forecast weather conditions.  A mix of rain and snow and wind is on the menu.  If you do brave those conditions wind drifting leech patterns or throwing small spinners and spoons will be your best bet.

East Lake – This might be your last chance to fish East and Paulina. There were good reports from both last weekend but the weather was perfect.  This weekend – not so much. Balanced leeches, prince nymphs and buggers are taking fish sub-surface  Wind drifting leech patterns and nymphs on an intermediate sink tip is a great way to take fish in the wind.  As bad as the weather might be – I have had good success fishing during snow flurries.

Lower Deschutes River – If I was going to fish anywhere this weekend I’d fish the “D”. With temps stabilizing on the mountain there isn’t anymore silt/mud being puked into the river by the White River so water clarity is good.  The cooler and cloudy weather is perfect for swinging flies and hardware.  Keep your flies and lures on the smaller side in the clear water and muted colors will work better too.   More Steelhead are showing in the river between Maupin and Trout Creek so the fish are spread out.  Guided clients are getting into 3 and 4 fish days.  Trout fishing has been very good too.  A 28″ red side was caught in the river below Warm Springs last week.  It was a beautiful fish.  Rainbows and a few browns are taking nymphs and at times the hatch will breakout on these rainy days and the fish will immediately key in on BWO’s or PMD’s. Look for hatches in the eddies and behind large rocks.  This is also a great time to swing streamers for big trout.

John Day River – Bass fishing is pretty much over for the year as the bass get dormant when the river temps fall.  Steelhead are in the river now but not yet in fishable numbers but that hopefully will change quickly.  The last two years the fishing has been spotty at best but this can be a great fall and winter fishery.

Metolius River – The Met is fishing well and weather doesn’t really affect the river too much unless its cataclysmic. October Caddis, mahogany duns and BWO’s are coming off right now and you can fish the rusty spinner fall in the early evening when it occurs.  The fish seem to like the caddis pupa more than the adult most times so fish that and another small nymph behind it.  Small egg patterns can be highly effective too with spawning Kokanee in the river. There are big Bull Trout up from the lake following the Kokanee spawn as well so swing big gaudy streamers on sink tips to entice those brutes.  Check in with Jeff at the Fly Fishers Place in Sisters for up to the minute river info, a guided trip or pick up the best flies and techniques for your trip.  There is also a generous supply of flies at the Camp Sherman Store.

Fall River – Fall fishes well in the late fall and it’s a little easier when there is a little chop on the water so this could be a great weekend to hit it. Fish small nymphs either Euro style or under a small yarn indicator. Don’t be afraid to work the deeper holes and cut banks with a wooly-bugger or streamer for oversize Browns.

Crooked River – As long as the river levels are consistent this river will fish well.  I love to fish small dry’s and droppers here but if the weather is bad a straight two nymph set up will catch a lot of fish.

I’ll be incommunicado next week (which is this week) as I’ll be up in the Hell’s Canyon area chasing elk and maybe some steelhead!  Good luck everyone!

Steelhead are spread out in the lower Deschutes as far upriver as South Junction. Fishing should pick up soon in the North Junction, South Junction and Warm Springs areas.

Fall can be some of the best trout fishing of the year in the area’s lakes and reservoirs. The cooler temperatures have sent most of the crowds home, and put trout on the bite as they feed aggressively to prepare for winter.

This is your last weekend to fish Odell, Crane Prairie and Wickiup before they close to fishing Oct. 31.

Umatilla River Coho made a strong push this past week with over 750 adults returning to Three Mile Dam.

Steelhead are starting to move into the John Day River.

A good bet for river redbands is the Chewaucan, which is a great fall fishery.

Best bet in the Klamath Basin is to target brook trout in the upper areas of the Sprague, Williamson or Sycan.

A recent sampling at Fish Lake (Wallowa Mountains) showed there are good numbers of both stocked rainbow and naturally-produced brook trout. Combine with cooler fall temperatures and fishing should be great.

Bottomfishing is now open to fish at all depths. Fishing for lingcod and rockfish was very good this past weekend. Many anglers caught big lingcod while fishing out past 40 fathoms. The daily bag limit for marine fish is 5 plus 2 lingcod.

Ocean salmon fishing for Chinook salmon from Cape Falcon to Humbug Mt is open 7 days a week through Oct. 31. The non-selective coho season is now closed. Chinook must be a minimum of 24-inches long.

Halibut anglers may now keep two halibut per day. All halibut seasons will end on Oct. 31 if we have not attained the quota before then. The Nearshore Halibut season is open Monday through Thursday each week in the Central Coast Subarea. As of Oct. 6, there is 55 percent of the Nearshore quota remaining. The summer All-Depth season for the Central Coast Subarea is open every Friday through Sunday through October 26 or attaining the quota of 67,898 lbs. As of Oct. 6 there is 31 percent of the All-Depth quota remaining.

Lost Creek Reservoir is probably the best lake for launching larger trailered boats at this time and the trout fishing will continue to be good throughout the fall.

Expo pond has some surprisingly large bass with decent bank fishing opportunities this time of year as vegetation dies back.

Reinhardt Park Pond has also been seeing some good fishing for warmwater species, and for recently stocked trout.

Fly-fishing for summer steelhead in the upper Roque continues to be good.

Several SW Zone waterbodies, including Lake Selmac, Expo Pond, Reinhart Park Pond, Saunders Lake, Upper Empire Lake, Butterfield Lake, Bradley Lake and Powers Pond were stocked last week with some legal size and larger trout. Thanks to cooler temperatures, many of these fish should be around and ready to bite.