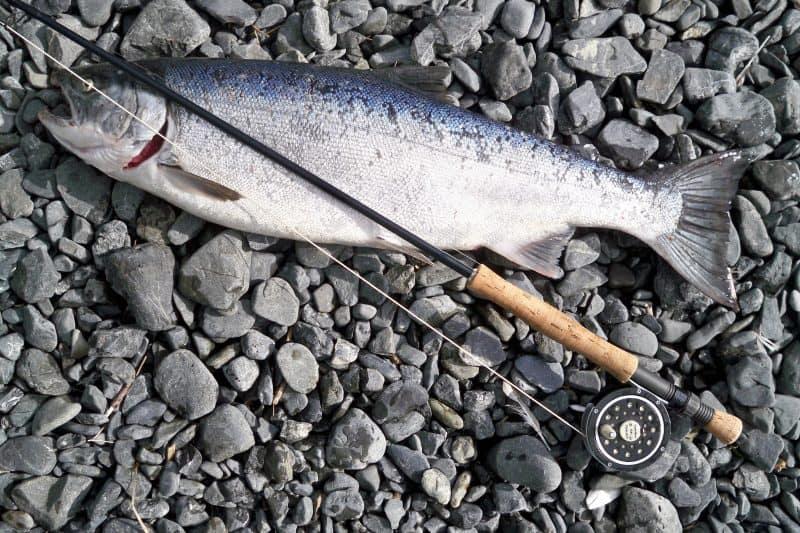 Willamette Valley/Metro – With the mainstem Columbia now closed to Chinook, coho, steelhead and sturgeon, metro anglers are focusing their efforts on the Sandy and Clackamas Rivers, as well as headed west to the Oregon Coast in pursuit of fall Chinook. Anglers took another 114 keeper sturgeon from the last opener (9/26) where the keeper fishery will likely remain closed until next fall.

Pro guide Jeff Stoeger (503-704-7920) of O2BFISHN reports on the Sandy River, ” This week’s report for the Sandy showed that most of the concentration was on Coho. The lower river had produced a few catches as we saw a nice little rise to the river. We saw the river go from 7.87 ft to 8.6 ft and was holding over the weekend with a lot of guys getting out. I was told that one guy had hooked and landed 3 fish with one being a keeper. The weather forecast is for more rain over the next couple of days which could bring the river up again. “

The Clackamas also saw a nice rise in river levels last week with positive reports coming from Robert Campbell of Fishermen’s Marine and Outdoor in Oregon City. Robert reported that the coho of the Clackamas have been rather “bitey” this year. Although it appears that the run isn’t exactly going to come in as predicted, fish are well distributed throughout the system (from the mouth of Eagle Creek) and are taking twitched jigs, bobbers and eggs (in the slow water), drifted bobbers and eggs in the pocket water and size 4 Blue Fox spinners.

Over 1,800 coho have passed Willamette Falls, indicating that upstream fisheries should be underway. Counts at Willamette haven’t been updated recently, but there should be catchable numbers of fish available for the few whom participate in this fishery.

And speaking of the Willamette River, through the efforts of ODF&W, the NW Guides and Anglers Association, the NW Sportfishing Industry Association, the Association of Northwest Steelheaders and CCA, the state has removed over 30 salmon and steelhead eating California Sea Lions from Willamette Falls last spring. Without this effort, there was an 89% likelihood of upper Willamette Basin wild winter steelhead going EXTINCT! With those problematic sea lions removed, now we have to secure a future for other runs of endangered salmon and steelhead, along with a declining population of white sturgeon, which has survived natural disasters for the last 200 million years!

If there’s one thing ALL sportanglers can get behind, it’s saving endangered salmon and steelhead from going extinct. That’s why it’s CRITICAL that you submit your public comments in support of implementation The Endangered Salmon Predation Prevention Act we all worked so hard to pass last year. If sportanglers don’t step up and advocate for the recovery of these species, there’s a chance the program may not get to it’s full intention.

We URGE you to submit comments on this very important program so recovery can move forward and the massive investments in time and money we’ve made in the Pacific Northwest don’t go down the throats of these sea lions! COMMENT HERE and you can learn more about the effort HERE.

Let us know at TGF if you submitted comments, we need to now how effective we are at getting out the message! THANK YOU! Email us at brees@pacifier.com. Keep your message clear and succinct:

Northwest Oregon – Although most of us consider the Buoy 10 fishery “So yesterday…” the fishery remains viable with the late run (“B-run”) coho starting to show. These fish are largely destined for Washington state hatcheries and not only are they large, their supposed to show in robust numbers. It’s likely however that the coho run will be downgraded, but there are still catchable numbers as one guide reported a 7-keeper day on Wednesday. It will remain a good option for the next few weeks.

See the full Buoy 10 report AND FORECAST by being a paid subscriber or see last week’s edition here.

Most north coast bays are producing fair catches of fall Chinook, but as speculated, the fishery is far from explosive.

Tillamook and Nehalem are yielding some nice fall Chinook. Anglers are impressed with the size of the fish being caught, there seems to be an absence of the smaller 4-year old fish at this point. Tillamook is producing most consistently in the Ghost Hole and the West Channel with a good bite reported in the upper bay last Saturday on the outgoing tide. Softer tides this weekend will shift effort to the lower bay.

Nehalem is producing from Wheeler to the town of Nehalem, but like Tillamook, success will likely be better in the lower reaches this weekend. The North Fork Nehalem remains low and clear with few fish moving up to the hatchery.

The Nestucca slowed, but you wouldn’t think it with the effort its been getting lately. Tidewater does have fish available, but their less in the mood as of late.

The Salmon River is predictably firing off as we hit peak season on this system. Bank anglers have fair access to fish here and boaters are still scoring a few in the lower estuary.

The Siletz has slowed a bit, but still producing some of the most consistent catches on the north coast. We’re in peak season here too so if the weather stays consistent, so should the fishing.

The Alsea is producing mediocre results and bobber fishing picked up this week. Fish should continue to filter into the system and trollers working the mouth should find Chinook and some incidental coho (requiring release).

Yaquina Bay remains an option and with the low tide exchange this weekend, Trolled herring in the lower bay, spinners in the upper should produce fair catches.

Crabbing should be good on most coastal estuaries this weekend. The ocean has been fairly decent.

Fall has arrived and with it lot’s of good – bad – good weather!

Crane Prairie –  Fishing was good and bad and good.  Last Thursday and Friday were great!  We had a group fishing flies and another fishing small spoons, spinners and Rapalas and everyone was catching fish. Saturday started out good too but the weather deteriorated quickly to a rain and snow mix…Sunday was full on snow so we packed it in early.  The good news is the weather is going to get nice again with Sunday and Monday downright warm so if you can get out…Fishing should be good at Crane or any of the Century Drive Lakes.

East Lake – Generally colder and windier than Crane but could be worth it this weekend with warmer weather!

Lower Deschutes River –  Fishing is good from Warm Springs to the mouth.  Guides are getting into nice trout to 20″ and Steelhead too.  It’s not unusual to hook Steelhead nymph-ing so kick up your tippet to 3x fluorocarbon.  Swinging flies for Steelhead has been fair from Maupin to Max Canyon.  Terminal fishermen are getting fish on spinners, Steely Spoons and jigs.  There are some Fall Kings in the river too but I’ve not heard how that fishery is doing….any reports from our readers would be great!

Metolius River – The colors right now on the river are worth the trip alone!  Fishing is pretty good too!

Crooked River – We have winter flows now at 140 CFS…the fishing is good!  BWO’s, PMD’s and caddis .  You can’t go wrong on the Crooked in October!

Owyhee River – No report yet but some hard core fishing buds are headed that way tonight so I’ll have a report next week.

The smaller lakes in the upper NE mountains are still fishable and I’ve seen more fish pics from my deer hunting friends than deer pics.  Don’t forget to throw in a pack rod this fall when your out stomping around for deer and elk.  This is a great way to get an amazing camp meal or two!

This should be a great weekend to get outside!

Anglers have been catching decent numbers of steelhead on the lower Deschutes River from the mouth to Sherars Falls.

Chinook and coho fishing continues to pick up on the lower Deschutes, with most fish being caught in the bait-allowed zone below Sherars.

Recent sampling revealed good numbers of good-size bass in Ochoco Reservoir. And trout up to 18-inches.

At Antelope Flat Reservoir, water conditions are excellent and recent sampling showed lots of trout available within 40 of the bank.

Trout fishing on the Grande Ronde and Wallowa rivers has been good, and should be good throughout the cool days of fall.

Fly-fishing on the Chewaucan River has been excellent, with one angler landing a 28-inch redband!

The Klamath River below Keno Dam is the best bet for good fishing in the Klamath Basin.

Fly-fishing for trout has been fair on Chickahominy Reservoir.

Fall is a great time of year to target trout in Cottonwood Meadows Lake and Duncan Reservoir.

Large redband trout are beginning to enter the Sprague River from the Williamson on their spawning migration.

Recent sampling at Fish Lake (Wallowa Mountains) showed there are good numbers of both stocked rainbow and naturally-produced brook trout. Combine with cooler fall temperatures and fishing should be great.

Ocean salmon fishing for Chinook salmon from Cape Falcon to Humbug Mt is open 7 days a week. The non-selective coho season is now closed. Chinook must be a minimum of 24-inches long.

Tuna are still being caught 20-35 miles offshore when conditions allow anglers to get on the ocean.

Anglers are still picking up a few summer steelhead in the North Umpqua, and with the recent cool/wet weather it may pick up a bit.

Most Chinook anglers on the Coos have been fishing from the Marshfield Channel to the forks of the Millicoma and South Fork Coos rivers.

Water temperatures in many lakes and reservoirs in the Rogue Valley are still warm enough for some good bass and other warmwater fishing while trout fishing is picking up at higher elevation lakes.

Fall is a good time to plan a trip to one of the high Cascades hike-in lakes — brook trout are hungry and active this time of year, and fishing will be good until the snow flies. Find more information about which lakes in this area are stocked.

Lost Creek Reservoir was stocked this week with legal-size and larger trout, with the cooler temperatures the fishing will be good and both boat ramps are accessible.