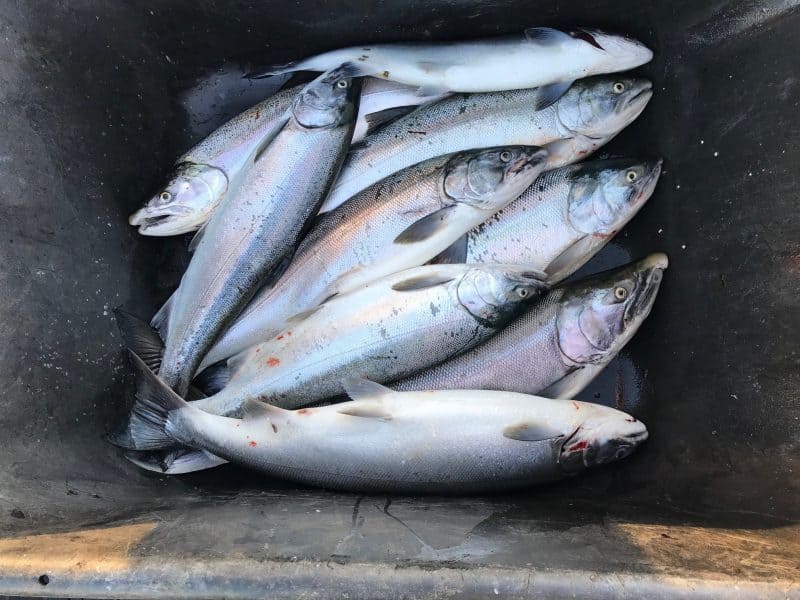 Willamette Valley/Metro – Managers met on Wednesday to discuss the potential for a Saturday re-opener of Chinook on the mainstem Columbia on Saturday. Apparently, the consensus was NOT reached between the two managing states and Chinook retention won’t be re-opened on the proposed Saturday date. For all the fun facts on how the Columbia River run is progressing, you can read the fact sheet HERE. There will, however, be a sturgeon retention opener from Wauna Powerlines to Bonneville Dam this AND next Saturday with a modest catch likely. For all the details on this fall opportunity, go HERE.

With Chinook season closed, coho remain front and center and recent rainfall did take river levels up slightly, but still not significant to seed the river fully with coho. Some are questioning the actual run size back to the metro rivers this fall, given only fair coho fishing in the estuary this season. That said, coho are present in the Sandy and Clackamas Rivers in fair numbers.

Pro guide Jeff Stoeger (503-704-7920) of O2BFISHN reports on the Sandy River, “This week, the weather took a nice change for those who like the rain. I had expected the river to take a large bump but it didn’t. The forecast is for more rain over the rest of the week with cooler temperatures.

Northwest Oregon – Tillamook Bay anglers are having a decent September season. Anglers fishing upper Tillamook Bay have reported decent catches of Chinook and a rare coho. Spinners and trolled herring are taking fish. The west channel was also fishing fair following the recent rain events. The jaws and adjacent ocean (when it’s been safe to fish) have been producing fair catches of Chinook and a rare coho as well.

The non-select offshore salmon season is going to fly again this weekend. Forty-three percent of the quota remains in the ocean fishery and weather looks like it will cooperate at least on Saturday. Offshore halibut, bottomfish, and crabbing may all be good options this weekend, weather permitting.

The Nehalem tidewater saw an influx of salmon with the recent rain event. South winds made this a good option earlier this week, but the action has quieted somewhat. The North Fork Nehalem received its first influx of coho mid-week, with only a few jacks reportedly being caught.

The Nestucca and Salmon Rivers both have fair numbers of Chinook present with the Salmon peaking over the next two weeks. Returns are expected to be modest for both of these systems.

The Alsea remains fair at best and the Siletz is starting to produce a few more fish right now. Of course, numbers will build on both of these systems over the next few weeks as well.

The lower Columbia River continues to produce fair numbers of coho to persistent anglers. Most experienced anglers thought we would have had slam dunk fishing with the numbers in the forecast, but that just hasn’t been the case lately. Limits are still quite feasible however with some sizable coho in the catches. Crabbing is improving in the lower Columbia as well.

Want to find success in Tillamook Bay this fall? Do you want to know how best to cross the Tillamook Bay Bar and where to fish at what time of the tide?

Up your chances for success by getting the newly updated The Guide’s Forecast Technical Report #7: Tillamook Bay Fall Chinook Fishing.

If you don’t find this report the most in-depth, detailed fishing information fact sheet on Tillamook Bay, we’ll refund your money… 100%! You’ll get detailed information on:

* How to fish the south channel
* How to cross the bar safely and what makes for safe ocean fishing conditions
* The most effective time to fish and where in Tillamook Bay
* What techniques to employ
* Run timing
* And MUCH, MUCH MORE!

And if you’re looking for any other Technical Reports from our region, whether it be Fishing the Lower Columbia for Salmon or Crabbing the North Oregon Coast, you can find our 20 report series HERE.

Crane Prairie – Fishing for “Cranebows” is good to great depending on the time of day and angler ability. The fish seem to change on the color during the day so play around with color until you find what they like. Bass fishing does what Bass fishing does during a low…It died. But as soon as the weather stabilizes it should be great until it turns cold for good.

East Lake – It’s on again off again like the weather. Some days are seeing big Callibaetis hatches and great Dry Fly fishing while the next it’s dead.

Lower Deschutes River – Report from the river today is the White river has blown out the lower river due to heavy rains. If you want to fish, fish above the falls. If you need up to the hour info on the river – Especially what’s happening below White River, contact Deschutes Angler in Maupin. Great info, flies, and knowledge abound in the shop!

Metolius River – Fishing has been good on the river with BWO”s and PMD’s, about to steal the show with the cooler wetter weather.

Crooked River – It’s been very good on the Crooked. This should be a great weekend to hit this river.

John Day River – The river has been really slow late summer this year due to the cool weather which kicks off lots of Thunderstorms.

Columbia – Got a buddy who has been doing great recently in the Bonneville pool around Hood River. Lots of big smallmouth in the 3 to 4.5 lb range. Salmon Fishing in the pool has been pretty decent too.

Well -that’s my story and I’m stickin’ to it! Best of luck everyone!

Fall can be a great time to hike into one of high elevation lakes ODFW stocks with trout. The weather can be great, the mosquitos are gone and the trout are trying to put on a few ounces in preparation for the cold winter months. Find more information on planning your hike-in fishing trip.

The lower Deschutes is open for Chinook until Oct. 31.

The following water bodies are scheduled to be stocked this week: North and South Twin, Pine Nursery Pond and Walton Lake.

Hunters in the area of the Umatilla and South Walla Walla forest ponds should remember to take a rod with them and enjoy a cast-and-blast weekend.

Trout fishing was excellent this past weekend at Blue Lake in the Gearhart Wilderness.

Fishing for yellow perch can be excellent in the Lower Williamson River, Pelican Bay of Upper Klamath Lake and Crystal Creek, if you can find them!

Fishing for brook trout is excellent this time of year in the Upper Sycan, Upper NF and SF Sprague, Upper Williamson, Long Creek, and a few high elevation lakes.

Recent rains are great news for fish and the cooler temperatures this weekend should create better fishing and more importantly catching.

No update from Pete this week.

Ocean salmon fishing for Chinook salmon from Cape Falcon to Humbug Mt is open 7 days a week. As of Sept. 8, ocean salmon anglers harvested 51.7 percent of the nonselective coho salmon quota. The non-selective ocean coho season will open this weekend as enough quota remains. Chinook must be a minimum of 24-inches long and coho must be at least 16-inches.

Tuna are still being caught 20-35 miles off shore when conditions allow anglers to get on the ocean.

We’re still waiting for salmon fishing to pick up no the Umpqua, but in the meantime, bass fishing continues to be good.

Salmon fishing in the Coos was good late last week from the Chip Pile to California Street Boat Ramp, with a few salmon caught above Marshfield Channel.

Good numbers of adult and half-pounder steelhead have been pushing into the lower Rogue.

September is the last month for trout fishing on the Floras/New, Hunter, Pistol, Sixes and Winchuck.

Smallmouth bass should be on the bite in the mainstem and South Fork Coquille.

Chinook fishing has been good on the lower Rogue thanks to recent rains. Most fish are being caught below the Hwy. 101 bridge.