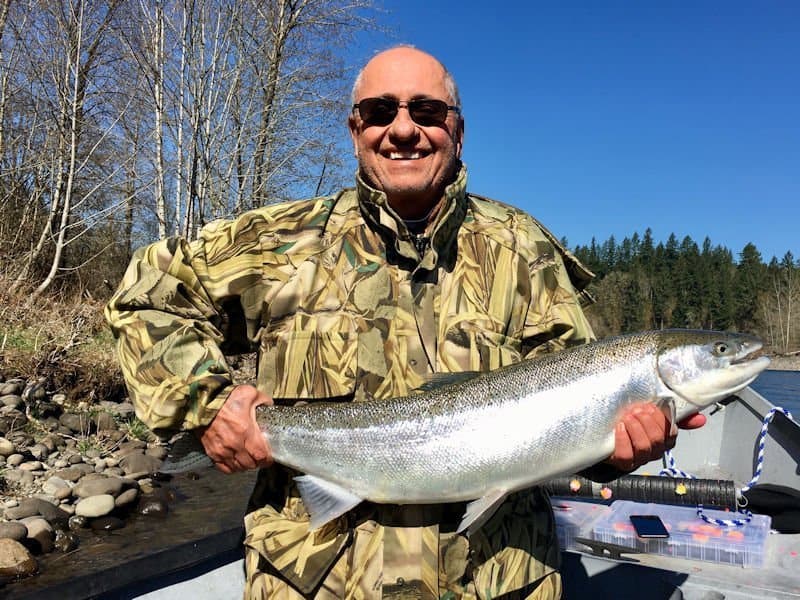 Willamette Valley/Metro – With the mainstem Willamette dropping and clearing into ideal shape, effort and catch has been good during this peak season. It’s back to more sporadic results, but great catches were experienced throughout the river last Wednesday and Thursday, and action remains consistent from the Portland Harbor to Oregon City. Last week, Willamette River spring Chinook anglers witnessed the best fishing since the 2015 season, when the run was much larger. All reaches of the lower Willamette produced similar catch rates according to ODF&W creel data. The season is well underway.

Temperatures remain below 57 degrees, a key benchmark for switching to hardware from bait such as prawns or sand shrimp. Wobblers will become more effective as the water warms, but fish will start to move faster past Willamette Falls too.

And speaking of fish passage at Willamette Falls, both wild winter steelhead and spring Chinook are moving more naturally over fish ladders at the falls, with the removal of 24 predatory sea lions as of late last week. Wild winter steelhead counts will certainly eclipse 3,000 fish, well over triple the depressed 2017 count. Managers were witnessing declining numbers of wild McKenzie River spring Chinook too, also known for arriving earlier than other wild returning Chinook in the basin. The pinniped removal program will certainly offer relief to this declining run of iconic salmon as well.

Bank anglers finally starting seeing an uptick in catch rates last week. High water pushes fish closer to the bank where anglers have better access to them. As flows drop, it’s likely catch rates will too for bank anglers. The Clackamas and Sandy Rivers will offer up other bank angling options in the coming weeks too however.

Although some late returning winter steelhead (mostly wild) are still showing on the Clackamas River, summer steelhead counts are on the increase, albeit slowly. Numbers will peak in late May and June with spring Chinook about the same time.

The Sandy River has both summer run steelhead and spring Chinook available, but peak catches are still weeks away. The high, roily Columbia River has the lower Sandy backed up, making it a fair option for spring Chinook trolling. Springers will enter here well into June.

Pro guide Jeff Stoeger (503-704-7920) of O2BFISHN reports, ” This week, the Sandy was still kicking out winter steelhead as well as some summer fish. I fished Tuesday and went 3 for 4 and another boat that I talked with had a double and landed both fish. The guy that I talked with said that most of his fish that he had hooked and landed were natives. He also said that he hooked a couple of summer fish and they were all hooked on 3.5 mag lips. The fish that we hooked were caught on mag lips and fresh sand shrimp. The count at the hatchery  of returning winter fish were just over 750 fish so far.”

Despite unprecedented opportunity on the Columbia River, interest and catches remain low due to high and off-colored water. The sportfleet is far from achieving its quota downstream of Bonneville Dam, but it’s unclear if there will be further spring Chinook opportunity.

Northwest Oregon – Now between winter steelhead and spring Chinook, the Tillamook district is fairly quiet, except for a few die-hard bank anglers still targeting winter fish. Summer steelhead are still available in the Nestucca and Wilson River systems. Spring Chinook should be present in Tillamook Bay itself.

The South of Falcon halibut opener is just a week away. It’s a generous quota this season, now we just have to hope for calm seas. Mariners have been experiencing the strong trade winds, making for challenging afternoon fishing. Plan your expedition to ensure your return trip home is going with the predominantly NW winds. The deep reef fishery is now closed to bottomfish.

Crane Prairie –  Fishing was good last week on  Chironomids  in red and red/black and  balanced leeches. I didn’t get a report from the bait brigade but powerbait or a worn floated off the bottom is always a good go to.

Wickiup –  It’s kicking out some limits for some while others aren’t getting anything.  The fish should be at or near the top for another few weeks but if you’re not getting them up high, start staging your gear at different depths until you find them.

Odell Lake –  Didn’t get an update but I assume it’s great because this is the time of year when it usually produces easy limits.

Prineville Reservoir:  The lake is at full pool and the fishing is still red hot!  Same as last report, bank fishing remains good on worms, powerbait and small spinners like Roostertails.

Lower Deschutes River – Very good fishing last week.  They’re aren’t any big bugs out yet but stonefly nymphs and girdle bugs were scoring some really big trout so the big bugs are on the move!

East/Paulina Lakes – It’s gonna be awhile yet.  The road is plowed to the gate but the gate is still locked and there is about 2 feet of snow and ice covering the lake, campgrounds and the ramps.  My guess is 2 weeks minimum.

Davis Lake – Bass are in the weeds and the shallows and fishing for them with BIG buggers and poppers is good!  There are some big trout around too that are worth the effort.

The rivers further east are high with snow melt and off color.  With all the late season snow, things should begin to clear up in another two to three weeks.  Last I checked the John Day was running at around 8000 cfs so it’s got a way until it’s fish-able.

Find even more quality detail from Tim in the full version of The Guide’s Forecast, SUBSCRIBE HERE!

Peach Pond will be stocked this week with 1,000 legal-size and 75 trophy-size fish.

Best bet for fishing in the Klamath Basin is Lake of the Woods for stocked rainbow trout, Klamath River below JC Boyle Dam for native redband trout, Wood River for brown trout and J.C. Boyle Reservoir for warmwater fish.

Lake of the Woods is scheduled to be stocked this week with 700 legals and 600 trophies.

Umpqua River spring chinook angling is improving after last week’s heavy rains and there seems to be considerable fishing pressure directed at them between the Scottsburg bridge and Elkton.

Shad are now being caught in the Yellow Creek area on the Umpqua River.

I did an exploratory road trip to evaluate bass and panfish waters along Interstate 5 between Sutherlin and Medford and was disappointed to find Ben Irving Reservoir near Winston to be very muddy and Cooper Creek Reservoir in Sutherlin to be nearly as muddy. Surprisingly, Ford’s Pond, just west of Sutherlin, was the clearest I have ever seen it. Galesville Reservoir, just east of Azalea, was also very clear and appeared to be at least ten feet higher than it was at this time last year. The lake that I actually intended to fish, Selmac Lake, appeared to be at a normal springtime level with about three feet of visibility.

The less than 90 minutes of bankfishing I did at Selmac was surprisingly productive.

The bass and bluegills at Selmac seemed to be scattered along the entire shoreline, but the crappie were tight to the outside edges of shoreline reeds along Reeves Creek Road. I didn’t hook any trout, but the lake has received nearly 10,000 planted trout in the last two months.

As of last Saturday, Eel Lake at Tugman Park was producing a few largemouth bass and rainbow trout. The bluegills and crappies haven’t yet shown up at the park, but they never seem to until after the spawn is over.

As for Loon Lake, it’s not quite back to where it was before the recent heavy rains, but the water clarity is improving and bluegills are starting to move back to the shoreline at the upper end of the lake. The heavy rains and muddy water seem to have scattered the recently planted trout.

Although the bass fishing at Tenmile Lake has been somewhat inconsistent, good catches are being made every day.

Most Oregonians seem to think that the five new commissioners that Kate Brown appointed to be ODFW commissioners will be an improvement over the last batch – if only because Bruce Buckmaster, a commercial fishing/gill net advocate will no longer be a commissioner. Hopefully, Brown is able to correct past mistakes and the new commissioners are able to make us “proud” – time will tell.

Many waters along the central and northern Oregon coast were planted this week or last week. The only local waters listed for being stocked this week are Tenmile Lakes – but Butterfield Lake received 400 trophy trout last week and Upper Empire Lake received 4,500 trout comprised of 2,500 legals and 2,000 trophies.

On the ocean, bottomfishing has been good when the ocean lays down and anglers have been able to make it out.

Beginning May 1, bottomfishing is restricted to inside th 40-fathom regulatory line. Fishing for lingcod and rockfish has been good when the ocean is calm enough to fish. The daily bag limit for marine fish is 5 plus 2 lingcod. The retention of cabezon is closed until July 2019.

Ocean salmon fishing for Chinook salmon from Cape Falcon to Humbug Mt is open. Chinook must be a minimum of 24 inches in length. The ocean is close to coho salmon.

More anglers are reporting catches of spring Chinook on the middle Rogue, with more on the way.

Great steelhead fishing is as close as downtown Grants Pass right now. Schools of winter steelhead have been reported in the Rogue River near a site where ODFW has been acclimating smolts the past two years. Baker Park is located across the river from the acclimation site and offers good bank access. Riverside Park may offer opportunity as well. Try casting lures like panther martins toward the opposite bank. Remember, the river is closed to trout fishing at this time.

Bass, bluegill, and crappie, are biting in places like Empire, Saunders, and Tenmile lakes, and Powers and Johnson Mill ponds.

SW Washington – The most recent report from WDF&W is from April 23rd. You can access it here:
https://wdfw.wa.gov/sites/default/files/2019-04/fishing_report_april15-21.pdf