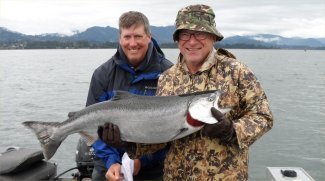 Willamette Valley Fishing Report – With a quick one-day opener now in the books, the last of the spring Chinook quota (less the 30% buffer to keep us from going over our impacts), is likely filled. Anglers, both trollers and anchor fishers reported fair action although not what one would think given a 4-day closure period, coming off the last day of effort on Saturday. The I-5 fleet reported some of the better action with a few guide boats reporting 3 keeper fish by noon. The lower river produced dismally, out of Westport, reliable guide sources stated activity was slow. Conversely, in the gorge, guides reported fairly easy limits where fish seem to stack up under these conditions and are quite willing to bite herring. Some guides even ran 2 trips. Now that this season is over, we’ll have to live on memories for the near future. It’s likely to re-open later in May, based on the run size update (early May) and how we performed on our quota. It’ll be come a Willamette, Clackamas and Sandy River show now.

Willamette River anglers have experienced excellent water conditions and good fishing in recent days. From Oregon City to the lower Multnomah Channel, the bite has been pretty good for a run that is expected to be similar to last year. Last Saturday, reports of an epic early morning bite were confirmed although the bite didn’t last long (they never do) when the sea lions figured out what’s going on. Sea lions will likely continue to be a problem in the area. The Portland Harbor continues to boot out fish for trollers with some guide boats reporting 5 to 8 chances on a full day effort. The lower Multnomah Channel produced good catches on Wednesday and has been consistent for the last 10 days. It’s dogwood blooming season here so get out there fishing!

Sturgeon effort has waned as spring Chinook interest is peaking. That doesn’t mean you don’t have some strong options however as harbor action is likely to remain good for another several weeks.

It’s still early on the Clackamas and Sandy Rivers for what seems to be a later returning bunch of spring Chinook in recent years, not to mention depressed numbers. Steelhead will keep interest growing however as a mix of late winter run fish and summers start to arrive. Spring Chinook and summer steelhead peak action won’t be for another month.

Anglers keen on fishing the Santiam Rivers are still a bit early for summer steelhead and spring Chinook but some late season winter fish may bend rods for those that know the fishery. River conditions should be great for the weekend. Spring Chinook counts have been steadily rising in recent days and dropping/warming water conditions will further stimulate migration.

North Coast Fishing Report – Not much to report here but anglers working the Trask River are reporting an occasional spring Chinook. Steelhead season is effectively over although a rare summer steelhead may be had and an even rarer late run winter fish too. There has been spring Chinook caught in upper Tillamook Bay even though the peak is still months away.

Sportanglers have a few more days to explore Young’s Bay as it should be laden with spring Chinook since the gillnet fleet hasn’t fished in there for many weeks. Nets are due to go in again around April 22nd but fish are being taken downstream of the confluence with the Klaskanine River. There have been some sport-caught fish taken there recently.

Central & South Coast Reports – Rockfish success out of most Central Oregon ports remains excellent but lingcod action is slowing. That is not quite true for boats fishing more southern waters however. Although weather looks a bit rough for the weekend, if anglers can hold off until early next week, the seas may calm but be wary of the minus tide series occurring that could create dangerous bar crossing conditions.

The spring all-depth halibut season dates have been set. Thursdays through Saturdays will be open during these periods:

Surfperch fishing off of most Central and Southern Oregon Beaches remains good.

The Umpqua is giving up the occasional spring Chinook but overall, action is deemed “slow”. There is an occasional steelhead still being landed. Coos Bay offshore Bottomfishing remains good when weather cooperates.

Catches of lings are coming from the port of Brookings and some nice sized sea bass when they decide to cooperate.

Although action started out good for Rogue River spring Chinook, it has faded recently, likely due to dropping water conditions. It should be peak season here however so plan accordingly. Steelhead action remains fair in the upper basin although many of the fish showing are recently spawned winter run fish.

Central & Eastern – Cold weather on the lower Deschutes has halted the insect hatch until a civilized time of the day. Mid-morning seems to be best, at least until the weather warms up. Swinging nymphs can be most productive this time of year. The off-color water doesn’t seem to be deterring the bite much.

Kokanee fishing has been slow to fair but steady for anglers using jigs at Green Peter. Kokes are running small here at about an eight-inch average but there is a 25-fish limit.

SW Washington – The Cowlitz River remains the predictable bright spot for both spring Chinook and steelhead in the district. That’s not likely to change either. Bank anglers working the Barrier Dam reach are faring the best (also predictable). Steelhead are being taken near the trout hatchery but in fewer numbers than spring Chinook.

The Kalama saw some spring Chinook and a rare steelhead for light effort over the weekend. The Lewis system continues to disappoint.

Drano Lake anglers are taking fair numbers of fish but given the success to the gorge troll fleet on Thursday, there is a wad of them about to pass Bonneville Dam. The Wind River fishery is considerably slower as the run will likely be a fraction of what the Carson fish hatchery is likely to see. PIT tags detected at Bonneville Dam indicate about 1,200 fish should return.