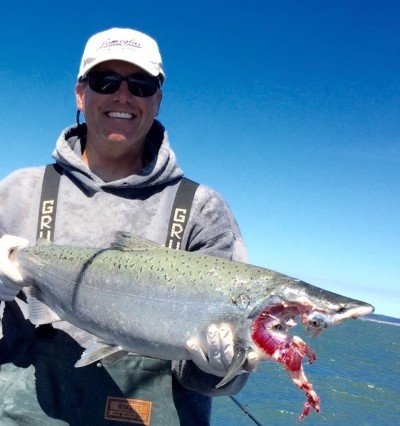 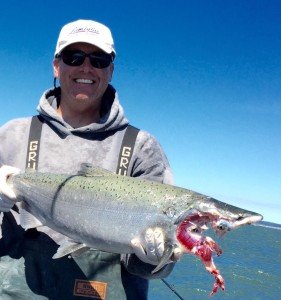 Where do we fit in?

As we enter peak season for chinook on the lower river, so we enter the sea lion circus. Most of the breeding population remains off the California coast but young bull California Sea Lions are taking advantage of the ample food sources on the lower Columbia, much to the frustration of sport anglers.

It’s hard enough to catch salmon, even in a river where over 1 million fish are due back but when a seal or sea lion steals one off of your line, one can’t help but feel anger and frustration for what most deem, “a real problem.” Of course seals and seals and sea lions have been plying the lower Columbia well before European settlement although it’s likely that native Americans hunted them to keep them somewhat in check. The days of boiled pinniped are long gone so there’s no real reason to cull the population other than angler sentiment. But it begs the question, where do we fit in?

The real problem is we’ve created an environment where it’s advantageous for pinnipeds to target sport anglers for an easy meal. So easy in fact, that it’s easier for them to steal fish off our lines than it is to go forage for themselves. Anglers don’t get nearly as angered if they see a seal or sea lion get a salmon on their own. Citing my bias, it sure would be nice to remove some of the predators of salmon for our own selfish purposes but this situation is just another reminder of how out of whack our ecosystem really is. I often tell my fishing clients we don’t necessarily need any more salmon hatcheries, we need an Orca or great white shark hatchery! From what I hear, there’s nothing quite so enthralling as an Orca taking a harbor seal or sea lion in the pecking order of predation. Yeah, let’s see more of that!

But I get sidetracked. I’ll write about baseline shift in another blog post but as I was discussing this with someone the other day, I started thinking out loud, which is never a good idea. The subject was the carrying capacity of the ocean. I mentioned that I didn’t think the carrying capacity of the ocean was nearly as good as it used to be, that’s likely why we haven’t seen a 100-pound chinook salmon on the Columbia in say, 100 years. I mean, were we really supposed to develop the technology to harvest all the critters in the ocean to the best of our ability? Thank God we did, pink shrimp is my favorite seafood but it’s also likely one of the most important food sources for the multitude of species I pursue sportfishing. The talk of the dock these days is when someone catches a 30-pounder; those “minnows” never received as much as a glance 30 years ago. What we have to face as human beings is that we are really the invasive species, working waters and lands that we never evolved to prosper in.

We’re still a long ways from living in harmony with nature but it is our responsibility to be aware of what we are doing to our fragile ecosystems and what we can do to minimize our impact. Maybe that’s pretty hypocritical of me given my profession as a professional fishing guide but we’ll continue to pledge to be sidelined to ensure the future of any species; I wish we all would do that. How long before the Bluefin tuna is decimated? What are your chances of seeing a wild Atlantic salmon spawning once again on the East Coast? Will it really take the Yelloweye Rockfish population another 65+ years to rebuild? But I’m sure the burning question remains, how did we get that salmon back from the harbor seal?

I knew something was up when this relatively manageable chinook salmon took off on a several hundred yard run, just as it was showing signs of surrendering close to the boat the other day. My suspicions were confirmed when the seal popped up for a breath of air with our fish in its mouth and our hooks in what remained in the mouth of the salmon. I told my clients, “Hold on boys, we’re going for a ride!” After catching up to the seal, I started circling overhead or at least what I thought was overhead. For a good 8 or 9 minutes, my goal was to make sure that this seal didn’t get a breath of fresh air in him, so he had to drop our salmon. Sure as heck, after about twelve 360 degree turns, I could see the line flatten out, indicating that the salmon was coming up to the surface. I told the young man to “Reel, reel, reel!” as loud as I could and by some act of God, we scooped the fish and brought all eight-tenths of it on board. There’s no better feeling than to see a disappointed harbor seal come to the surface with blood-shot eyes, looking around and asking himself, what just happened here?