Anglers from across the nation converged in Washington DC this week, this angler included, for the National Saltwater Recreational Fisheries Summit to discuss gains and losses that the sportfleet has experienced in recent times. The take-away, recreational fishermen care about the future of this fragile resource.

Of course no “summit” no matter how shiny ever escapes scrutiny from anglers with an opinion. You can imagine what 120 anglers may say. That said, all praise and scrutiny comes from the passion we all have for our sport and our resource, and we’re grateful to have an outlet to discuss items of concern to the managers that guard this critical resource. To NOAA and NMFS, thank you!

Despite being one nation, different regions throughout the country have very different needs, wants and outcomes, as well as a complex set of challenges. It’s to be expected for a resource with the pressures of an intense sport and commercial fishery prosecuted upon it. We’re coming off a 20 year win streak where scores of species have been rebuilt from severely depleted status, and now with all of the perceived abundance, and a growing sportfleet that’s becoming ever so more effective in extraction, we have to pay closer attention to watching the hen house. It wasn’t that long ago (and of course it still applies today), that we were saying the same thing about commercial fisheries having the capability of wiping out entire populations of fish. It’s likely the major factor that put many species into a depleted state before the Magnuson Stevens Act came to the rescue during the last decades improvement to the law.

It was during this time frame, when the sportfleet didn’t have the boats, gear and knowledge needed to exploit these offshore species, and the charter boats, as well as the rest of us, were more focused on salmon, steelhead, halibut and sturgeon. Now look where we’re at with these species. Here’s a brief timeline:

So what’s the trend? We go from one fishery to another when we see a loss of opportunity and take, like a school of locusts wiping out a wheat field. Sorry, that may be a bit dramatic. But really, that’s the trend, and although we have some great opportunity in our bottomfish fisheries, how long will they last? When will salmon once again return to consistent abundance and the biggest question, what factors lie ahead that could cause even more long-term damage to the natural resources that fuel our coastal economies and our recreational desires that make up the very fabric of our humanity?

From the anglers sitting around the multitude of round tables in the main banquet room, the groups in the break-out sessions and the presenters during the sessions, we have a lot to still figure out, even after decades of intense management and restriction.

The one common denominator stands true however; anglers care, and the day that changes, there’s going to be some boats for sale, cheap.

This would be a good time to join The Association of Northwest Steelheaders. 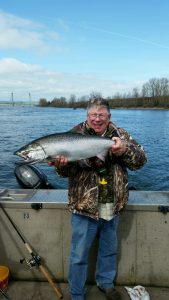 Past Association of Northwest Steelheaders President Bill Kremers with a