All election, all day. At least the crazy election ads are no longer playing.

Most in the conservation community are reeling from the election results for fear of massive rollbacks in conservation efforts, but pundits from election night also said stock markets were going to plunge into oblivion the day after the election. That didn’t happen.

This election told us several things, most of all, America isn’t happy with the direction we’re currently headed in. The other statement one might perceive, is that jobs remains the number one priority for most Americans; I’d put that high on my list of priorities as well.

Although you don’t hear much of this message, but if you think about it, it makes perfect sense. Job growth is economic growth and economic growth often clashes with ecological growth. Why do both words (economic and ecological) both start with eco then? Well, I just looked it up and it’s “late” Latin for household; I remain more confused than ever before…

President-elect Trump stated, well, his son did anyway, that the Malheur take-over is not something he could support. That’s a good first step. Secondly, Trump stated that he supports historical hunter and angler access to public lands, let’s hope it remains that way, since 70% of all of America’s sportsmen and women recreate on public lands. I just have to hope that mining and drilling for gas and oil doesn’t become a priority when we “Make America great again!”

We never really know what the leader of the free world will do to make his or her mark for sportsmen, I haven’t been all that impressed with the Obama administration, but then again, if fish and wildlife resources and hunters and anglers were the priority for any administration after Teddy Roosevelt, we’d have more fish and game in America, than we’d know what to do with!

Even with a radical change of direction in Washington DC, if that really happens, will Congress be able to function any better for our community? There is still so much left out there hanging; the Land and Water Conservation Fund, grossly underfunded for 49 of the last 50 years (this is the fund that purchased what is now the Jewell Elk Meadows, a special place for me, since I got to work there for about 7 months early in my career) and of course the Magnuson Stevens Act (MSA), the federal fisheries law that allows me to harvest 2 delicious lingcod every time I go fishing in the salt. One of the MSA’s greatest provisions is the requirement to not overfish a species and develop rebuilding plans for stocks that are in peril. Let’s not forget, it also enabled us to claim the waters 200 miles off our shoreline, which aided us in eliminating high seas driftnets deployed by foreign fishing fleets that targeted our salmon and steelhead stocks.

If it’s our intention to continue to recreate on our public lands and waterways, it’s up to us to make healthy and abundant stocks of fish a priority for our lawmakers. Most of us may agree with Congress, there’s bigger fish to fry than conserving and rebuilding our fish and wildlife; I mean people need jobs, our seniors need social security benefits, our veterans deserve our respect, and our children need an education. If you take a deeper look at these “essentials” for Americans however, you don’t have to look far to see the connection of healthy populations of fish and wildlife. People need jobs so they have expendable income to fish and hunt, seniors need a reliable source of income for the same reason. Our veterans deserve the best care so they can recreate outside and of course our children need a quality education so that they can get jobs and the cycle goes on. 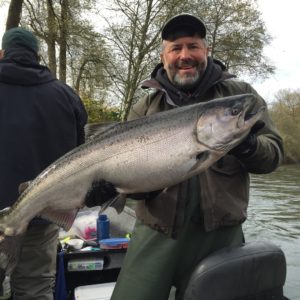 The quandary still exists however. How do we grow economically as a nation, and preserve ecologically as a people, so we can continue to enjoy the lifestyle we’ve become accustomed to? I don’t have an answer and I don’t know if any administration does either. I do know that we may have to face that question sooner, rather than later or we’ll really be sticking it to the next generations of hunter and anglers that hope to follow in our footsteps.

Since we don’t seem to be addressing our population increase all that seriously, and none of us have any intention on leaving the sport we so love, joint cooperation between sportsmen groups, environmental groups and any other groups that support a future for fish and wildlife will be required to keep this a priority for those that have been asked to lead. As our population grows, so does the pressure for extractive activities, no matter if it’s oil and gas drilling or fishing and hunting; we’re going to have to find a way to meet the demands of our future societies.

President-elect Trump gives us the impression we’re in for a ride; let’s make sure the mode of transportation doesn’t leave the station without us.