It’s Been a Seven Suit Session So Far

What’s weird is that despite record employment in the state and a very robust economy for Oregon, we’re still looking at cost cutting measures across the board for natural resource agencies, education and health care. Under this scenario, we should be growing budgets, not slashing them. I need to save that for another blog post, or better yet, someone that does wear a suit more than seven times in 2 months.

In Oregon, besides the ongoing conflict between the gillnet and sport fleet, the future looks troublesome for water in the state. I know, hard to sell that one with 130% of snowpack stacked up in the Cascades this year. We all know however, there will be lean years ahead, especially given the climate predictor models for the future.

In Congress, it seems that there is effort afoot to roll-back protections that are largely responsible for rebuilding so many of our depleted stocks of fish. Now, we have it pretty good here on the west coast. We’ve gone through some high production years, when only 20 years ago, there was a massive federal buy-back program for the commercial groundfish fleet and incredible restrictions in the way of trip limits and entire fisheries closing when a small amount of bycatch was attained. It was a stark reality check of exactly what we’re capable of, and how a lack of science bit us in the butt (Read: The Lorax by Dr. Suess).

It’s a rare day when the conservation community isn’t asking for significant improvements in a major piece of legislation such as the Magnuson Stevens Act. After all, it’s been a decade since we did the last good mark-up of this signature Federal Fisheries Law, surely there’s more work to be done?

Of course there’s improvements that can be made in any 10-year old law. Well, Magnuson Stevens is actually 40 years old, but it’s been 10 years since the last reauthorization. What’s nice however, is that we’ve been riding a wave of success here on the west coast that’s allowed managers to liberalize restrictions, open up waters that have been closed for a long time, and collect information that enables us to better manage these fisheries for sustainability into the future. Who can’t get behind that?

Well, the Eastern Seaboard may not subscribe to that same philosophy as we do. Cod stocks have yet to fully rebound, controversy surrounds red snapper management and a species called winter flounder is floundering. West coast fisheries management seems like a piece of cake compared to our East Coast cousins.

Admittedly, I don’t know the working waterfront to the East. It’s not fair for me to judge. The East coast may have not enjoyed the same rebound as we have here on the West coast. There does seem to be however, a strong sense of the needs of industry over the future of the resource. Don’t even get me started on Bluefin tuna; the world seems quite content wiping that high-value species off of the face of the earth in the name of sushi. What happens once the Bluefin are gone? All of a sudden Yellowfin become the preferred species, Bigeye after that, and albacore after that?

I also have to claim ignorance as to how the Atlantic performs on an ecosystem level; our Pacific seems quite resilient and even though we’re going through some tough times right now with low returns of salmon and especially steelhead. We’re already poised to make a strong comeback however, with the dissipation of the El Nino event, and hopefully the burying of the warm water blob.

Fisheries science is becoming more exact, and few can argue that fishermen that spend so much time on the water don’t have anything to offer the conversation. What’s vitally important however, is that we leave the take it now, we’ll pay it back later mentality because once you dig that hole, it’s just that much deeper that you have to come out of it. That’s not a very fair consequence for the future fishermen of our nation.

We’ll be keeping you updated as to how the progression of the reauthorization of Magnuson Stevens is going, coupled with good and bad legislation that’s currently in play or soon will be. The newly introduced (in Congress) “Modernizing Recreational Fisheries Management Act of 2017” may sound like a good idea, but the jury is out and we’ll be studying it a lot harder in the coming weeks.

Please, please Congress, don’t make me get out of my raingear for this one, I can’t afford to buy another suit until salmon season is over with.

Pictured below is Jim Lorenz with a nice wild steelhead buck from the Sandy River from April 10th with guide Chris Vertopoulos. 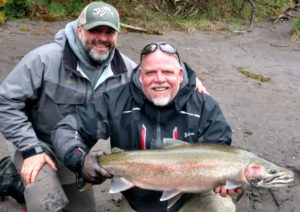