Last week I wrote on the need for regulatory action to save salmon. After writing about that, I feared that I gave the impression of an underappreciated volunteer base; nothing could be further from the truth.

I work for the Association of Northwest Steelheaders, a dedicated group of over 1,600 members that collectively, contribute over 30,000 volunteer hours annually to the recovery of salmon and steelhead populations, including introducing new anglers into our sport. Most would agree, I’m not sure I know of another organization that gives so much back to the resource than the one that I am involved with, it’s the greatest attribute our organization has, of which there are many.

Like so many in our community, I have donated a large amount of volunteer time to organizations that share my vision of a healthy environment or that grow opportunity for our sport, it just never feels like it’s enough. Without this broad contribution from our collective communities, so much would be left undone and our environment would suffer the consequences. From what I hear, our nation’s volunteer base is unmatched by any other global standards. I guess it’s a benefit we enjoy for the standard of living we’re privileged to have.

Unfortunately, not everyone believes they have a responsibility to give back to a resource from which they’ve benefitted so much from. We all know these people and it’s hard not to judge but volunteers lead by example and maybe someday, they’ll get it. I also believe in karma, what goes around, comes around. The treasurer of our organization, Brannan Hersh, had a pretty challenging month in August but he and his family persevered. Now, when anyone in almost any organization is asked to volunteer for a position, about the last position filled is the Treasures position. Brannan has taken on this position in spades and no one feels more privileged than I. Well, after paying all his dues during the month of August, he got his reward on August 22nd, catching the big one for the season, on the lower Columbia: 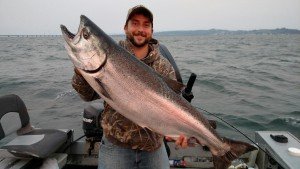 Now that’s what I call karma! To pull off the coup, there was a sea lion working the waters near us during the epic fight and at one point, it ripped off enough line to make me think one of these pinnipeds had his fish for a while. I had to tell him to horse it in before it got ripped off by the ultimate predator.

So as our Association’s members continue to tally the volunteer hours at an amazing rate, it makes me wonder what the possibilities are if everyone contributed just 40 hours a year to helping restore our natural resources. For a relatively small 1,600 member organization such as ours, we’d double our contribution and our impact. Not even an hour a week would be required to achieve this benchmark.

When we head to our state’s capitol or to Washington DC, it’s not how many members our organization has or even what we do to further salmon and steelhead recovery but how many hours our membership gives on behalf of our mission. That’s what impresses upon our policy-makers. The bottom line here is we wouldn’t get this kind of response if we weren’t deeply committed to the recovery and sustainability of this species or our passion for sharing our sport with newcomers. Sportfishing, for any one of us has had a lasting impact on us. Every one of us remembers where we caught our first steelhead and our best day of fishing, for each specie we pursue. We have a better recollection of what we used last year to catch all our fish than when our own birthdays are! I don’t call it so much a passion as I do a recessive gene. There’s no other way to describe our passion for this sport. For me, no one else in my immediate family fishes but both of my grandfathers were outdoorsmen. If there’s one thing I do know about myself, it’s that I’ll always love to fish and will pursue salmon and steelhead for as long as the law allows.

The most ironic factor, we can hardly believe that relatively speaking, few others share that same level of passion as we do. As an industry desperately seeking change, we’ve had to refine our messaging, finding a tone and tenor that resonates with law-makers. Salmon have certainly garnered their fair share of media attention, there is no other Pacific Northwest iconic species that we fight to protect as much as we do salmon and steelhead.

So, for those that can’t find the time to give back but do have the time to take, I urge you to reconsider your MO, volunteering with your fellow advocates will pay dividends for you in the future, just ask Brannan Hersh. For those that already volunteer, no matter how much or how little, I wish to personally thank you for all that you do. Even though you may feel underappreciated at times, know that your turn is coming and that because of you, you’re leaving Mother Earth a better place for what makes us whole.