Strike Out on Spring Chinook; A Big Win for Fish Conservation

A few weeks ago, I wrote about a great steelhead trip with legend Buzz Ramsey. He’s attained hero status for a variety of reasons but like other regions in the country, there is a cadre of un-sung super heroes that do the yeoman’s work on fish conservation. One of those men is Jim Martin, just a day away from retiring from his third career as Conservation Director of Pure Fishing, the world’s largest tackle manufacturer. Cheers to Pure Fishing for seeing such a position as a value to our community, cheers to Jim Martin for his limitless contributions to the betterment of sportfishing.

Formally the Chief of Fisheries for the Oregon Department of Fish and Wildlife, then Governor Kitzhaber’s salmon advisor, Jim is a walking encyclopedia of fish biology and one of the most passionate fish advocates that I’ve ever come across. Besides that, his excitement on his fishing and hunting trips is infectious and his ego, non-existent. His energy is that of a 22-year old, he flies back from giving conservation talks on the east coast, and is on the water in Oregon, the very next day, in pursuit of his favorite fish or game. He’s been an incredible mentor to me and thousands of other hopeful biologists, fishermen and conservationists. 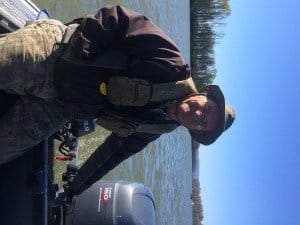 Jim Martin at the helm, fishing the lower Multnomah Channel

Well, I got to spend the day on the water with Jim, not only getting an opportunity to finally get out for spring Chinook after all the great reports I’ve been hearing about, or fishing a section of the Multnomah Channel that I’ve never fished, but also spending more quality time with such a respected leader and learning more about our approaches to fish conservation in the years ahead. It seems that I’ll have gainful employment for many years to come.

We have some incredible challenges ahead, Jim and I certainly didn’t get a chance to solve all of the world’s problems on just one fishing trip, despite the fact we only had one bite all day (I had to settle for a chicken Caesar salad that night). We covered the controversial Senate Bill 830, which prioritizes sportfishing on the mainstem Columbia River, directing commercial gillnets to SAFE areas (off-channel areas off the mainstem Columbia, where few endangered fish swim). We covered rules and regulations governing our natural resources and the water challenges we’ll be facing in the not-too-distant future. Most importantly, we asked ourselves, who will have “it” covered when the conservation leaders of today are gone, the need for future foot-soldiers will be greater than ever before.

Of particular interest was water. With the future of climate change knocking at our door, resulting in higher amounts of rain events in the fall and winter months and lower snow-pack due to warmer temperatures at higher elevations, if we don’t solve the problems of tomorrow, today, it will be too late to make a difference. If we don’t instill a fundamental attitude change in how we manage our most valuable resource, clean, cold, oxygenated water supplies, we may not have a need for fish and wildlife biologists in the future.

Admittedly, we salmon and steelhead fishermen are a bit snobbish. Most (of us, anyway) would consider salmon and steelhead anglers to be some of the most savvy in the world. Some might call us stubborn. Who really spends all day in a boat for the chance at a spring Chinook, especially knowing full and well that it often takes over 20 hours of effort before you have a reasonable chance at catching one. Regardless, it takes a lot of experience and certainly some luck, to become consistent at our trade but no successful salmon or steelhead angler would give up what we have here in the Pacific Northwest to fish the bass circuit, even if it meant a six-figure income over the course of the year. Many of us have invested hundreds of thousands of dollars in our equipment, and thousands of hours of time into what we love most, and that’s not going to change anytime soon.

Jim was instrumental in working with other interested sport interests in improving the Magnuson Stevens Act (MSA), especially when it comes to preserving our forage fish stocks. Some of the brightest minds are coming together, having a deep discussion on how to make the next reauthorization of the MSA the most visionary reboot to date. With our rapidly changing ocean environment and challenges ahead we don’t even know about, we have to be proactive in our approach to our fishery resources and the environments that they rely on.

Jim also has incredible foresight in the increasingly polarized political environment. If our politics are pulling us more to the right and more to the left, how are we ever going to find the middle? There are sensible lawmakers in congress and in our states, but sportsmen and women have the ability to reach out to both sides of the aisle to highlight the social and economic benefits of strong protections for the natural resources we so get to enjoy. Lord knows, I sure wouldn’t mind getting that 20+ hour per spring Chinook down a bit closer to what my current schedule allows. I can only do so many salads in a given week.