I just completed a 420 mile round trip to Southern Oregon. Having been born and raised in Northwest Oregon, as well as spending the vast majority of my professional life in this region, it’s easy to forget how diversified the greatest state in the union is. By the way, it is cold and rainy so no, you do not want to live here for those considering a move.

Bio-region diversity exhibits incredible opportunity. Admittedly, it is a lot easier to see different bioregions on terrestrial lands than it is on the ocean, but I assure you, they exist underwater as well.

The first thing on my mind when I travel down to southern Oregon, viewing the scrub oak and myrtle trees is turkey hunting. It was not that long ago that I took up turkey hunting, but I knew as a little kid, that it was something that I wanted to do. I will not go into great detail, most Oregonians know of the biodiversity and understand the different regions we enjoy across our incredible landscape. What is worth mentioning is that these diverse ecosystems still require protection so that hunters and anglers can reap the benefits these treasured habitats produce.

Most of us that recreate on the ocean tend to pursue some of the more highly migratory species, such as salmon, albacore and halibut. Those species do not have any specific habitat needs in the ocean. Rockfish and lingcod as well as our favorite crustacean Dungeness crab, all have pretty specific habitat needs. With fairly robust bottomfish populations, it’s hard not to believe that these lesser pursued but still socially and economically valued rockfish species habitat needs are not being met. After specific conservation measures were put in place following the crash of many of these species, and more importantly an opportunity to rebuild already depleted stocks of fish, the 1996 revision named The Sustainable Fisheries Act of 1996 has a proven track record of fulfilling its objective. Sportanglers have reaped the benefits of this act for the last 2 decades.

As far as habitat goes, we’re just starting to understand how subsurface habitats effect different fish populations. Most marine life exists in coastal habitats. It is a classic example of how the crossing of different bioregions are animal factories, and the reliance the terrestrial and aquatic ecosystems have upon each other. For example, just as the dead and decaying carcasses of wild salmon bring marine nutrients to interior rainforests, leafy debris, pine needles and of course trees deliver the base forage material for the saltwater environment to slowly consume and pass through its system. What better example of a symbiotic relationship? 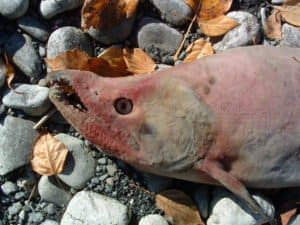 Much of our destructive history of commercial fisheries harvest has largely been addressed. Gone are the days of deep sea trawls that destroyed coral habitats and sensitive rocky reefs. Those were the real fish factories of the past. It was a painful and costly lesson in habitat destruction, not likely to return as a method of harvest ever again. It obviously contributed to the dramatic downsizing of the commercial trawl fleet back in the early 2000’s and didn’t help the already fragile coastal economies that relied on those fisheries. But like the fish themselves, we are a resilient people, we learn from our past mistakes, adapt to the conditions we’ve been dealt, and often move onto other behaviors that also compromise the long term viability of our working waterfronts.

Well, fast forward to 2017 and it’s certainly going to be a curious congress. It might be a good thing that a lot of the obtuse energy in Washington DC will be spent on healthcare and immigration. Maybe they’ll deemphasizing the destruction of our fish stocks this time around. Us west coasters may be spared some of the bad decisions. Our own Pacific Fisheries Management Council is pretty forward looking. They have a good track record of conservation minded measures that promote the long term sustainability of our fishery resources, but other regions of the country aren’t so lucky.

As with the case on many conservation issues, our work will consist of reaching out to fellow anglers to hear from them about what matters most. I don’t know an angler friend of mine that can’t get behind the future opportunity for the next generation of angler, we’re just that passionate about our sport. The Magnuson Stevens Act is about just that, ensuring healthy stocks of fish, for the future fishermen of our region. We’re always going to see the ups and downs of our fisheries, but by learning from the mistakes of our past, hopefully, we’ll never see the draconian closures that were required to enable our crashed stocks of many of our rockfish species. It could be worse however, you could live in a state that doesn’t have an ocean.