Casting the Next Generation of Guardians

I’ve told countless individuals that we’d never see another catch and keep season as long as I was alive. Just another notch in my belt, one of many for my mis-calculations. It may be hard to call a 5-day fishery much of an opportunity however.

But, it wasn’t even like the old days, it was like the old, old days, when cars and boats were lined up for a ½ mile down the highway, waiting their turn to get to the ramp, launch their boat, and begin their day. I don’t remember seeing any days like I did on the only Saturday it was open, it was mayhem.

With the slot size narrowed, a 2:00 p.m. closure (kinda sounds like a 2-hour Sitka herring opener, doesn’t it?) and a meager quota of 3,000 keepers, this fishery was managed very conservatively, as it should have been. There’s a lot of pressure on sturgeon right now, in particular, the shift in life history that has the spawning population hiding in tributaries of the Columbia, to escape predation by the Stellar Sea Lion population that has decided these seven to nine foot spawning sturgeon are a good source of food for them. With a fraction of the water quality, habitat and strong flow that make the sturgeon spawn successful, well, recently, the sturgeon spawn hasn’t been so successful.

There is a sizeable keeper population however, and the Washington and Oregon fish and wildlife agencies allowed a limited consumptive harvest. It’s over now however, at least for this year.

When I think about sturgeon however, you can’t help but revel in the fact that these things have been around for much longer than the dinosaurs have. Like all species, they too have fluctuated in population, but in their 200 million years of existence, let me restate that, in their 200 million years of existence, they have survived, even thrived in their environment. And not just white sturgeon, whose population still remains relatively intact. Other species of sturgeon have this same life line, hundreds of millions of years of history. Yet, in the last 200 years, we’ve brought several populations of sturgeon to their knees. Quoting from the International Union for the Conservation of Nature, Eighty-five percent of sturgeon are at risk of extinction. I’m pretty some of the opponents of the conservative season stated this factoid. It does cause one to pause.

Somewhat more intriguing, these are a long-lived species and it often takes a 30-year time span before they become able to spawn. Overharvest could certainly be easily achieved. Given the reduction in spawning range and capability our localized white sturgeon stocks have had to put up with since the construction of dams on the Columbia River, one might be somewhat surprised we have as many as we do. Despite the life history similarities of some of the longer-lived rockfish species in our oceans, they have a much more complex life-cycle that I’m not sure anyone has figured out. One thing is for sure, they’re doing something right in order to survive for 200 million years.

My personal observation is that we’ve seen a jump in the population when we saw more robust returns of Eulachon smelt. In years of low abundance in the Columbia River, we found sturgeon in good numbers in my home waters, Tillamook Bay. I once caught a 53-inch sturgeon with nine juvenile Dungeness Crab in its stomach. Those couldn’t have gone down all that easy.

Now despite my conservation ethic, I wasn’t going to sit on the side-lines while all my fishing buddies took advantage of such an opportunity. This was just too good an opportunity not to take advantage of. Besides, before the concept of a re-opener ever came about, I had lots of people telling me, “If they ever open it up again, put me first on your list…”.

I put in two days during the 5-day catch and keep season, and it brought back fond memories. Most importantly, it gave me another reality check that our fishery resources are pretty spectacular, yet fragile, and we owe it to future generations of fishermen to take care of these fish. We still have the opportunity to take advantage of well-managed stocks of salmon, steelhead, sturgeon, halibut, rockfish and albacore, but not many other nations do. That not only makes the United States unique, that makes our fishery resources worth a lot more on the open market, and a lot more on the social market as well.

This is just another reason why reauthorization of the Magnuson Stevens Act is so critical for our federally managed species. Although many species under MSA don’t have the same, large home ranges that sturgeon do, they too are susceptible to over-harvest and negative impacts that we’ve had a hand in. Hindsight doesn’t work for species that are already gone. Do you ever get upset after seeing those iconic pictures of 100+ pound Columbia River Chinook salmon that you’ll NEVER have a chance to catch one? I do, I kinda get super-pissed about it actually.

Here’s to sturgeon, salmon and a strong Magnuson Stevens Act. And to Dad (Bing) Perrine when describing his two son’s experience in pursuit of sturgeon in early June, “Our boys can’t stop talking about today, they are so excited to go again! Oh, and Audrey, my 5-year old, is NOT going to let me go again without her!”

So really, here’s to the next generation of guardians of our fishery resources! 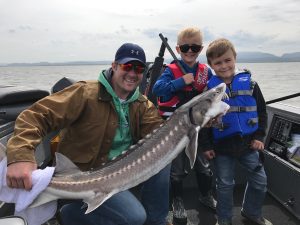