Just a fable to me, I’ve heard the stories that have intrigued me to fish this spot. Charter boats from Garibaldi, coming from the south, and a few sport boats coming from Illwaco and Hammond, out of the mouth of the Columbia River. Rumors of throwing back lingcod under 10 pounds, and seemingly limitless catches of sea bass. This quickly became a top tier bucket list wish.

I was with a father-son commercial fishing team, fresh into the industry. The son, Tyler Betnar, just discharged from serving our country in the army, was ready to enter a new chapter of his life. He had a fistful of cash and decided to invest it in a couple of limited-entry permits, and the fishing vessel Pursuit. This wasn’t their maiden voyage, and Dad has had exceptional success as a professional fishing guide. Of course, my anticipation was running high.

Passing over the Columbia River Bar on the outgoing tide wasn’t too troublesome, as often an opposing tide can be. Seas were forecast for a minimal swell, but a south wind was producing a two-foot wind chop. When we rounded the south jetty, we were taking the small chop to the bow, but it was a 24-mile trip to the south; definitely a cause for question.

We forged ahead, halfway thinking in my mind we’d be turning around before too long. It wasn’t unsafe, just a bit uncomfortable, especially if it was going to take 2 hours to reach our destination. This is a common distance for albacore, but you’re often rewarded with a multitude of dense, delicious tuna lions. My desire for lingcod and sea bass was being put to the test.

Well into the journey, I knew now that there was no turning back. At least I was going to check off another bucket list item, we arrived about an hour and forty-five minutes later to Wash Rock. Bottomfishing is commonly fast action on the Oregon Coast, and we were fishing water that had not been tapped very heavily given the wild winter we had. I had nothing short of big expectations and sore arms soon to be.

We certainly caught a fair number of sea bass, targeting the shallower water so the barotrauma wouldn’t affect the price these guys get for live fish deliveries. Of course they had the whole set-up, with aerator and circulator. These guys don’t skimp on investments.

It wasn’t long before a multitude of sea bass hit the tank. I came down for lingcod of course, now where are those 20-pounders?

We had to head a few more miles to the south, approximately 6 miles, in fact. Thank God we were going to get to ride the south wind back to port. A rare occurrence in May as the trade winds typically start up this time of year. The Trade Winds allow for boats coming from the south to ride the afternoon northwest winds back to Garibaldi. There is nothing worse than a 25-mile run against a 4 to 5-foot wind chop; no lingcod, no matter how big, is worth that.

We dropped down to Silver Point, looking for the pinnacles that commonly harbor large lingcod. We found good action with white grubs, flutter jigs and frozen herring all working well, for deep swimming lingcod. Most of the water we fished in was between 150 and 175 foot deep. Targeting the drop offs for lingcod is always a good idea.

We didn’t find many large lingcod, but did come across good numbers of them. I can’t say my expectations were fully met, but a tote full of live seabass and lingcod is nothing to be too discouraged about.

We ended up with a nice batch of fish, and I got another lesson in rockfish identification. A few yelloweyes were landed and released, some brownies, cabezon, lingcod, black and blue rockfish, a few canaries and even a quillback. The depth of diversity off of the Oregon Coast is nothing short of incredible. You just can’t help but imagine, what this area is seething with. It definitely justifies another trip to this productive fishing ground.

I’ve seen these rocks from Highway 101, and peered at the Tillamook Head Lighthouse from the carnival beaches of Seaside for 40 years. To get to see it up close from the seaward side, was a hefty bonus. It was a great day, even with a persistent 2 – 3 foot wind chop.

It is the quintessential success story; a young man dedicated his last 4 years to serving in the military, coming out and living a dream not many 21-year olds gravitate toward. Tyler is determined to make his living from the sea, which just wasn’t feasible 20 years ago. It’s a new era with fishery management plans, a forward thinking Pacific Fisheries Management Council, and a strong Magnuson Stevens Act, which in-of-itself rebuilt a depleted stock of lingcod, into a robust population for sport and commercial harvesters. 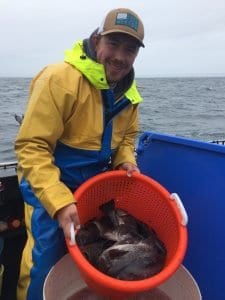 The Magnuson Stevens Act (MSA) is one of those silent giants, the quiet muscle in the corner that sits stoic, until he needs to go to work. MSA celebrated its 40th birthday last year, and Congress is considering the next phase of its existence.

It’ll be up to the Tyler Betnar’s, the small commercial boat fleet, and those sport anglers that haven’t checked off Silver Point on their bucket list, to ensure this resource lasts into the future. Success is nothing to tinker with, we want to continue to ride the wave of success that MSA has brought to our communities.

No matter who is controlling Congress, the Senate or Executive Branch, stakeholders have a responsibility to ensure a future for themselves, and the next generation of fishermen. It’s easy to overlook the rebound of this resource when we have so many other valuable fish species to take advantage of. Look at it this way however, we turned to bottomfish when the salmon populations crashed, sturgeon and albacore were also an “alternative” species, often discarded by fishermen from another era. Salmon remains king on the Oregon Coast, but an anglers desire to harvest fresh, abundant and tasty seafood has yet to be quenched.

It’s time to pay attention to the little details, there’s really no other species to exploit.