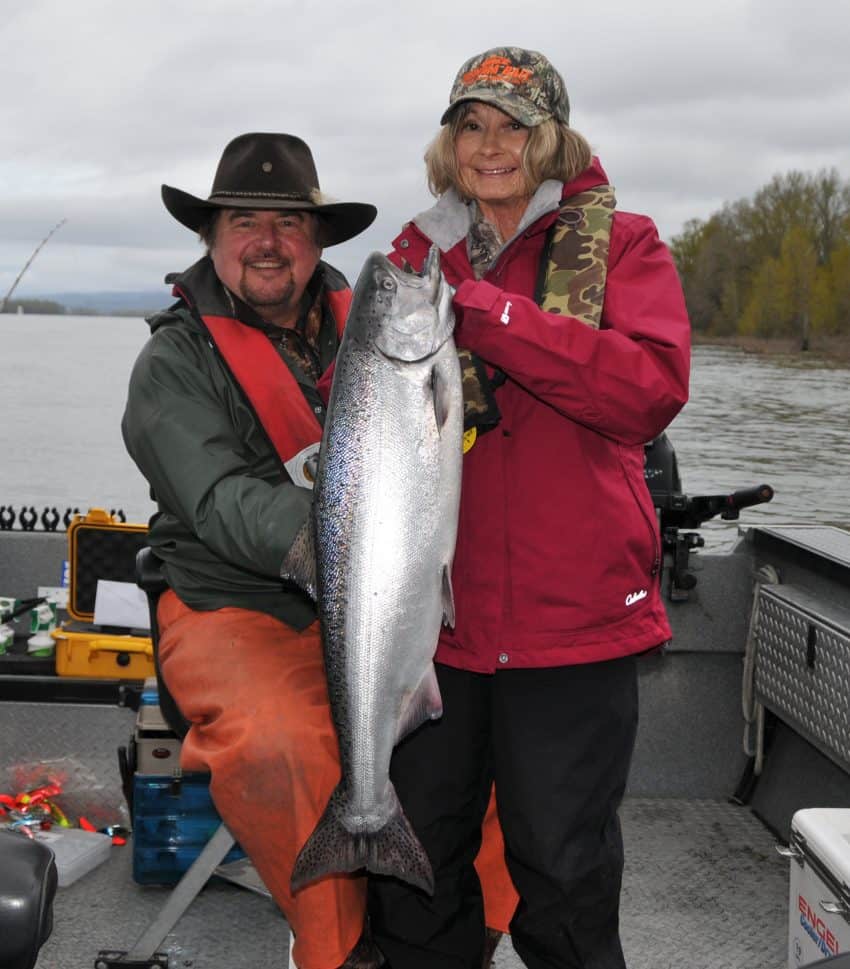 With this year’s yummy-tasting spring Chinook beginning to flood into the lower Columbia and Willamette Rivers, now would be a good time to drop what you’re doing and go fishing. When planning your adventure, especially if your destination is low in the river, I would encourage you to check on what the tides are doing as they have a big influence on current speed and when the salmon might bite best.

What you may not realize is just how much ocean tides can influence when and where the catching will be best. After all, (did you know?) tides affect the Willamette all the way up to the falls at Oregon City and the Columbia to Bonneville Dam. If you fish near these barriers you should realize that although the tidal influence might be slight, the bite is often best around the changes in current speed caused by ocean tides.

Fishing guides and veteran anglers understand that spring Chinook respond to the changes in river current caused by ocean tides and almost always bite best before and after the change of the tide – similar to the way they do when foraging in the Pacific Ocean, Puget Sound, or Buoy 10. For spring Chinook, the best bite of the day is almost always before and after the change of the tide. Because of this, it’s a good idea to make sure you’re on-the-water and fishing during these time periods.

A paper tide book, available at tackle stores, or a phone app (Ebb Tide) can tell you the time of the tide for various locations along the Columbia and Willamette Rivers.

Obviously, it takes longer for a flooding water to slow or stop the river’s current at Longview or the Portland Harbor than it does at Astoria/Tongue Point. Most paper tide books list the time of high and low tide at Astoria and provide a correction table for the more popular river locations, which will give you the amount of time to add or subtract from those listed in the book. For convenience, some retailers offer paper tide books that list the adjusted times for some river locations.

Phone apps (like Ebb Tide) show the tides for different locations along the river and scribe a vertical line across the screen showing the current time as it relates to the rise and fall of the tide.

Depending on where you will be fishing, a really large tide can slow, stop or reverse the river’s current (think lower Columbia or Willamette slough) and can make a difference in which technique you employ, the area of the river you visit, as your adventure should be timed to hit the best-bite-of-the-day based on what the tide is doing.

Trolling is best when a flooding tide has slowed river current or caused the river to stop altogether. Plunking/still fishing is best when tides are running out, creating the needed current to work stationary lures. Of course a big ocean tide will have more influence on what the current is doing than a small water exchange.

If you have a boat and plan to troll, you should be on the water at least an hour before low tide and fish through low slack, the flood, and at least the first half of the outgo. By scheduling your trip this way, you will be taking advantage of two tide changes.

During times with little or no current (slack tide), I troll like a drunken sailor because I know my trolling success will be enhanced if I maneuver my boat in a zigzag pattern. By trolling in an irregular pattern, your lures or baits will change direction, speed, and action, which can trigger strikes from following salmon that might otherwise lose interest. Be advised, however, that when fishing areas crowded with other boats you might risk ridicule if you zigzag troll. After all, others might think you’re playing chicken or bumper boats and take offence.

Remember the very best bite of the day is often during the first few hours of the outgo – when the water goes from slack to running. It’s when the water first begins to run that the salmon will turn and face into the current – a time when you will likely experience be best success by trolling downstream, the opposite way these tasty salmon are facing.